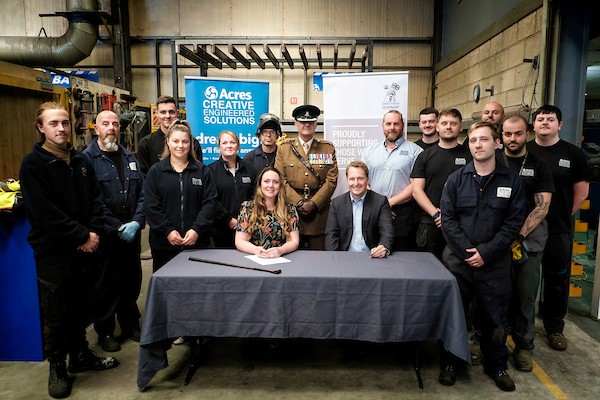 Derby-based Acres Engineering has received the highest accolade from the Ministry of Defence to recognise their support for the Armed Forces Community.

The family business, which is located on Castle Lane Industrial Estate, Melbourne has received Gold Award as part of the Armed Forces Covenant.

This acknowledges employers who provided exceptional support to the armed forces community and Defence by going above and beyond their Armed Forces Covenant pledges.

Luke Parker, Managing Director at Acres Engineering, said: “Acres Engineering proudly supports the Armed Forces Covenant and pledges to support the Defence community  within the business, ensuring those who have served in the armed forces are treated fairly.

“We always wanted to exceed the agreement and progress our engagement to the Gold Award and we are proud that our work here has been recognised by the MOD. We enthusiastically endorse the hiring of reservists and veterans at Acres Engineering and we stand by those who have served our nation.”

Major Goodwin said: “Acres Engineering Ltd is a great example of how employers are putting the Armed Forces Covenant into action to support the wider Armed Forces community. As Employer Recognition Scheme (ERS) Gold award holders, they have raised the bar for Derbyshire employer support and are well placed to share best practice and inspire other employers to follow their lead and experience the benefits of Partnering with Defence.”