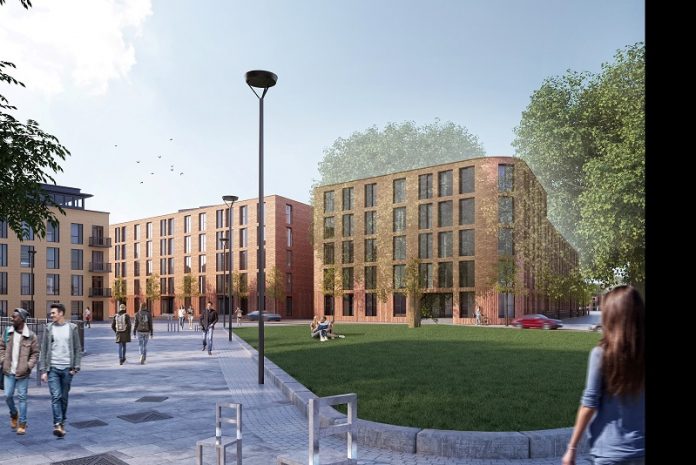 Elevate Property Group is to undertake its second major East Midlands development in Derby as part of the Castleward regeneration scheme.

The site is located adjacent to Castleward Boulevard between the city centre and Derby Railway Station.

The development of a total of 272 apartments in two phases across a 1.55 acre site running between Liversage Street and John Street could start this year when detailed planning discussions are concluded.

Both phases will offer a mixture of studio, one, two and three bedroom apartments.

Elevate Property Group has been working on proposals to develop the two adjoining plots of land since 2018.

Tom Hewitt, architect director at BDP Architects, who have designed the scheme, said the proposals were designed to reinforce Derby City Council’s masterplan, supporting the council’s vision for the area.

“Liversage Street is an historic manufacturing and residential area, and the former site of a saw mill, which has seen successive change over the past 200 years.

“Our design picks up on contextual references, with the vertical alignment of windows and classic industrial warehouse style, as well as the use of red brick with curved corner features.

“We identify Liversage Street as part of a reinvented and growing community and the new homes will be ideally located between the city centre and the railway station, contributing a valuable new source of quality housing in central Derby.”

David Hofton, sales and marketing director at Elevate Property Group, said: “We anticipate that Liversage Street will appeal as much to first time buyer as to downsizers and investors, indeed anyone looking for attractive accommodation in an ideal location for those working in the city centre or commuting via rail.”

The Liversage Street scheme has been designed by BDP Architects, with input from BACE Construction Consultants and planning advisers Ridge & Partners.

The group is currently developing Trent Bridge Quays in Nottingham, 95 townhouses and apartments on the banks of the River Trent, which will be followed by a second phase of development for a further 58 similar dwellings in Meadow Lane.

Tess Egginton - 13th February 2020
New council homes in Nottingham are to move closer next week when plans go before the City Council’s Executive Board for approval. The properties on...