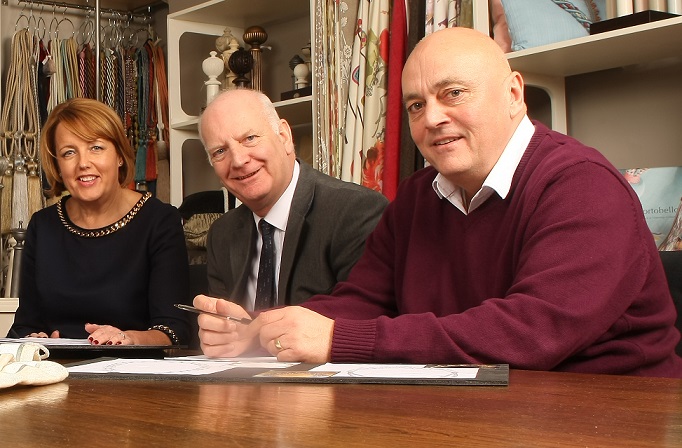 The funding, which forms part of Lloyds Bank’s pledge to support Midlands businesses with up to £2.5 billion, will see Jones & Co consolidate two of its existing premises into one at a new 9,720 sq ft state-of-the-art facility on Lortas Road.

The business also operates two additional premises at the location and the move will see the firm bring all divisions on to one site.

With a turnover of £7 million, it is expected the move will allow the business to increase its capacity by up to 20 per cent, growing its soft furnishings product range and improving services for its 4,600-strong interiors customers base.

Founded in 1909, the business’ button division, Jones Buttons, is the country’s largest supplier of buttons to the fashion industry and operates one of the UK’s few remaining button dye houses.

Each year, the company supplies more than 50 million buttons for all types of fashion house, from high street to haute couture. Customers include high-profile brands such as Liberty, M&S and Laura Ashley.

In the 1980s, the business diversified and launched Jones Interiors, which rapidly became a leading name in the textiles and soft furnishings sector. It now supplies a range of more than 17,000 bespoke products.

John Ashley, chairman and great grandson of the founder at Jones & Co, said: “Our mantra is to deliver the highest quality products at the best price, on time, every time. Having a state-of-the-art new head office provides us with the opportunity to build on that promise and, critically, will deliver massive benefits by bringing our team under one roof.

“The team at Lloyds Bank has been an incredible asset throughout this process, and we look forward to its ongoing support as we look to use this investment as a springboard for future growth.”

Chris Perkins, relationship director at Lloyds Bank Commercial Banking, said: “In addition to its impressive heritage, Jones & Co is a great example of a dynamic business that is continuously looking for new growth opportunities.

“Lloyds Bank’s own origins can be traced back to the button-trade, having been founded in 1765 by British button-maker John Taylor, and we’re proud to have been working shoulder to shoulder with such an ambitious business for the past 70 years.

“The fashion industry is worth £26 billion to the UK economy, and the Jones team is well known as a long-standing supplier to a ‘who’s who’ of British brands. We plan to be by their side during 2020 and beyond, as part of our plan to help Britain prosper.”

Derby’s Acres Engineering has invested a 5-figure sum to replace its extraction equipment as it gears up for what it hopes will be a...
Read more
General News

Three in four businesses are concerned about a further economic shock arising from a non-negotiated exit from the EU, the UK’s biggest trading partner,...
Read more
General News

With the Government giving the go-ahead for business events to recommence from 1 October, this year's highly anticipated East Midlands Bricks Awards presents the...
Read more
Property

Beeston's new cinema will be handed over to its operators before the end of the year, after Coronavirus saw delays in building work and...
Read more

Derby’s Acres Engineering has invested a 5-figure sum to replace its extraction equipment as it gears up for what it hopes will be a...
Read more
General News

Three in four businesses are concerned about a further economic shock arising from a non-negotiated exit from the EU, the UK’s biggest trading partner,...
Read more