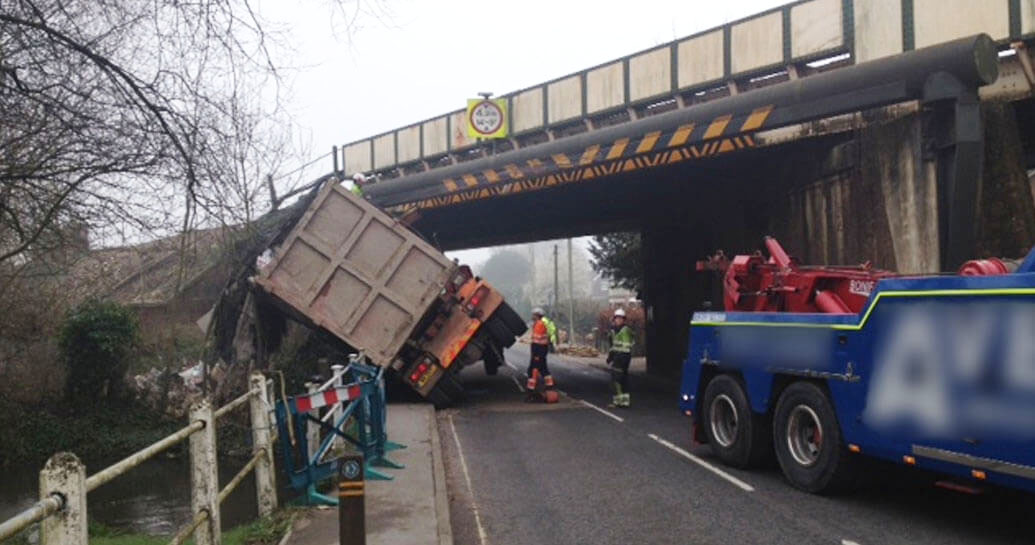 Hundreds of thousands of rail passengers will suffer hours of delays and cancellations this month as bridge strikes – i.e. when a lorry that’s too big hits a low bridge – reach their peak.

This week is expected to see a peak, with new figures revealing October/November will see around 10 incidents reported daily. Research suggests this could be due to the hour change and increased deliveries ahead of Christmas. Figures show most bridge strikes happen between 10am and 11am, but remain high all day until around 6pm in the evening and can cause hours of travel chaos.

The railway suffers almost 2,000 bridge stikes every year, costing the taxpayer about £23m in damages and delays.

‘What the truck’ and ‘Lorries can’t limbo’ are just two of the eye catching straplines for Network Rail’s new ‘bridge bash’ campaign aimed at HGV drivers and haulage companies.

Sir Peter Hendy, chairman of Network Rail and a driver of a double decker bus himself, says: “Size does matter when you’re a professional driver in a heavy vehicle. Not knowing the size of your vehicle or load could lead to a serious accident, and the loss of your licence.

“Every incident creates potential delay for tens of thousands of passengers and potential costs for taxpayers, and this is happening multiple times a day.

“It’s only a matter of time before road or rail users are killed as a result of this carelessness; we need professional HGV drivers and their operator employers to get behind and support this campaign to eradicate bridge bashing, which reaches epidemic levels at this time of year.”

Network Rail is urging drivers to fully understand the size of their vehicles and plan their route to avoid low bridges – too many drivers are chancing it under railway bridges with disastrous results.

The most bashed bridge in Britain, currently Stuntney Road bridge in Ely, Cambridgeshire has been hit 113 times since 2009.

Kenworthy Road bridge in Homerton, comes a close second with 99 strikes in the last eight years and third a bridge on Thurlow Park Road in Tulse Hill which was also been struck a whopping 92 times.