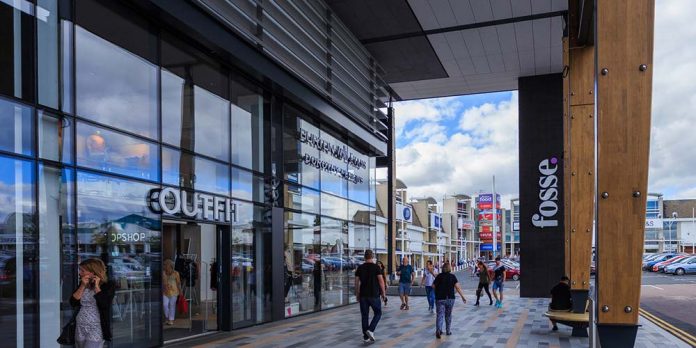 The Crown Estate has revealed four signings to the new development currently underway at Fosse Park, as construction steadily progresses into its fourth month. The news is particularly positive after Debenhams cancelled its plans for an anchor store at the site.

Nando’s, Greggs, KFC and EE have confirmed they are taking units at Food Central, the new dining space creating up to 13 food units and four retail units. These announcements join previously confirmed brands at the extension, Next, Clarks and TK Maxx.

Once completed, the redevelopment will create a total of 140,000 sq. ft of additional retail and restaurant space, increasing the offering by 40% to complement the current Fosse line-up.

The evolution of Fosse Park West and the investment for the redevelopment of the Food Court, now valued at £168 million, includes a £5 million placemaking and public realm investment in the existing centre. This will deliver new communal areas and event spaces, complemented by improved landscaping, widened walkways and enhanced accessibility.

The development is now currently more than 45% pre-let with letting conversations ongoing. Further announcements will be made in due course including an update on the anchor space, where following the approval of its CVA, Debenhams has confirmed that it will not be progressing with its new store.

Mike Bell, Senior Asset Manager, The Crown Estate, said: “We are excited to be announcing the addition of Nando’s to our development. This, along with the confirmation from EE, Greggs, KFC and other existing brands that they will be moving across to the new development, demonstrates the confidence retailers have in the investment we are making.

“Following the news that Debenhams will not be taking a store at Fosse Park, we have been actively working with the local authorities on our future plans and engaging with the market to explore exciting new brands for the space when it opens in 2020. We look forward to providing further updates in due course as we create a brilliant place for visitors, shoppers and the local community to enjoy.”

Break down the Budget with Streets Chartered Accountants

Tess Egginton - 14th January 2020
rg+p has launched its third studio in the heart of Birmingham’s business district. The practice has taken space at 1 Newhall Street, the contemporary glazed...

New document shaping the future for developers given green light by...

Pochin comes to Derby in another coup for Eagle Park