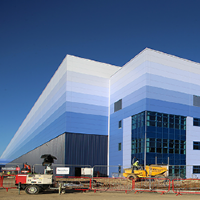 Take-up of industrial & logistics space (units of 100,000 sq ft +) hit 34.1 million sq ft in 2018, a 32% increase on 2017 figures and 14.1 million sq ft above the long term average. Despite the recent negative headlines retailers accounted for up to 53% of this demand, according to Savills latest Big Shed Briefing

Savills predicts that this trend will continue into 2019 as retailers continue to get their supply chains fit for purpose in order to compete with online giants such as Amazon in a new multi-channel world. For example, Next and Marks & Spencer’s have both made significant financial commitments to upgrade their supply chains over the next few years.

What’s more, new entrants such as Wayfair are increasing their warehouse space exponentially. The US furniture retailer, who commenced its UK operations in 2016  from a 258,503 sq ft (24,015 sq m) unit in Magna Park Lutterworth, has since agreed a pre-let for a 1 million sq ft (92,903 sq m) build-to-suit facility. This signifies a 286% increase in floor space in just two years.

The report reveals that the average deal size is at its highest level ever, now standing at 281,000 sq ft (26,105 sq m), which reflects this drive for expansion.

At present, Savills is not currently seeing Brexit have a significant impact on occupier demand, however this may change as more clarity emerges over pending trade agreements. Regardless of outcomes, occupiers should be comforted by the fact that supply is now at its highest level since 2014, standing at 31.4 million sq ft (2.917 million sq m).

Richard Sullivan, national head of industrial & logistics, comments: “The industrial & logistic sector continues to remain robust despite recent headlines about the high street. Instead, retailers have woken up to the importance of focusing on efficiencies in their supply chains, which has resulted in an increase in take-up activity. Whilst Brexit has also been at the forefront of discussions over the past 12 months, we are yet to see any empirical evidence, but with a record number of speculative announcements in 2018 the UK should be better equipped to deal with any fall out post 29th March if we do see a spike in demand.”

The Government is being urged to provide direct support to key strategic manufacturing sectors and companies to ensure their short-term survival through the pandemic. The...
Read more