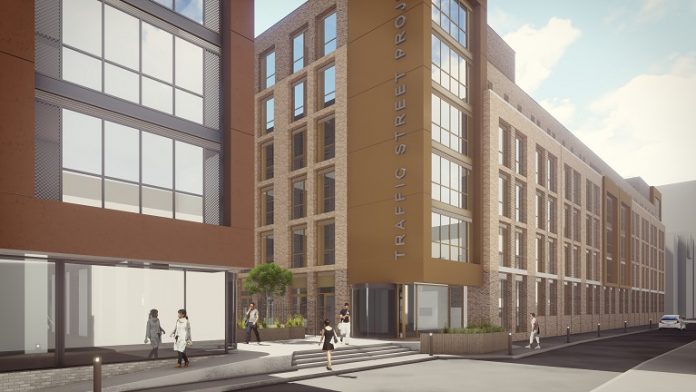 The development would see two blocks of accommodation constructed, offering a mix of studio apartments and clustered bedrooms around a shared kitchen and lounge, for up to 523 students.

The two blocks will have distinct identities, both using brick palettes and styles indicative of Nottingham’s industrial roots, contributing to and helping to reinstate Traffic Street’s historic frontage.

Communal space will be located around a central square at ground level. Traffic Street is also the location of the main entrance point to the scheme, minimising any potential additional noise for residential areas within The Meadows.

The development will vary in height from three storeys up to six storeys. The taller elements of the scheme will also be set back from the Traffic Street roadside.

On Waterway Street West, public artwork will be incorporated into the design, with the intention to include local historical references designed in tandem with local artists.

The location has a varied history. It was used to grow crocuses to harvest saffron before later, in the more recent industrial past, being the location of a former industrial print works.

Most recently, the site has laid empty and unattractive as a brownfield site, leaving Traffic Street — still the home of the Castle Rock Brewery and one of Nottingham’s past historic industrial areas — unrecognisable from its industrial heyday.

A public consultation has been launched asking for views on the new residential development.

Nigel Bobroff, Director at Jensco Group, said: “Jensco Group has a significant knowledge of the East Midlands with developments including the award-winning One Friar Gate Square for the University of Derby School of Law and Social Sciences and Agard Court, student housing also for University of Derby.

UK’s largest supplier of buttons to the fashion industry expands to...

New Leicester business community on the way as first stage of...