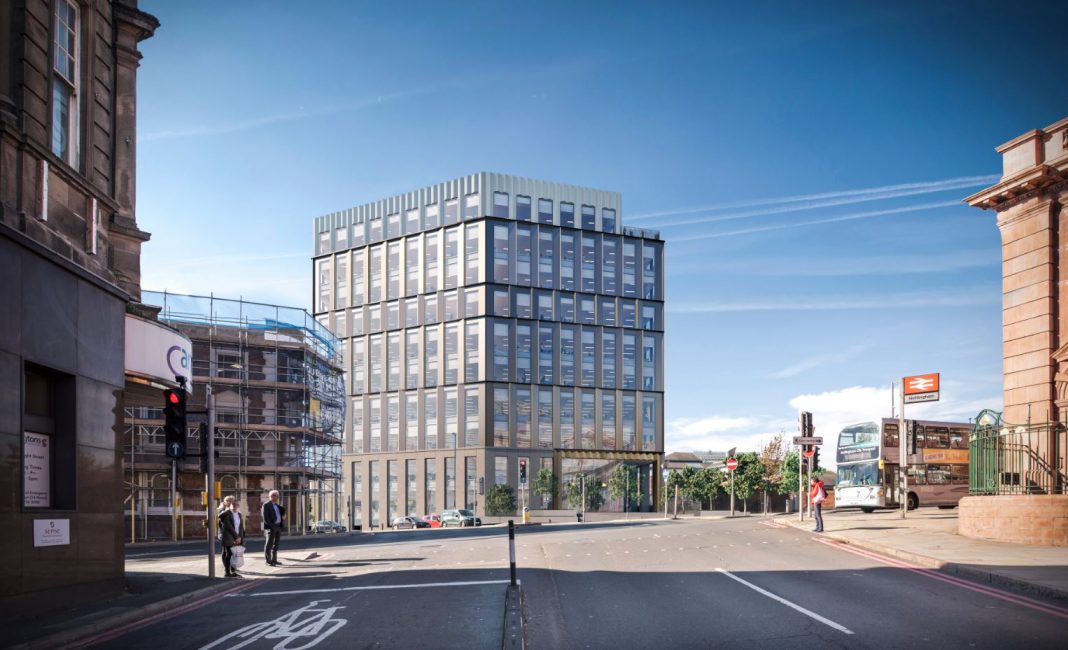 A transformational office development scheme has been submitted to Nottingham City Council, creating thousands of jobs – and setting a ‘cornerstone’ for the city’s Southern Gateway.

Developers Peveril Securities and Sladen Estates have lodged a planning application to bring 62,022 sq m of Grade A office space to Unity Square, the 1.14 hectare site in Queensbridge Road, opposite Nottingham Train Station.

The scheme will advance the £250 million Southern Gateway regeneration project – creating a new business district within an area of the city in need of redevelopment.

The planning application encompasses two office buildings – the first being ten storeys and the second being 13 storeys high. The build will be in two phases with landscaping and an attractive urban space connecting Unity Square and the station. The height and scale of the office buildings, along with urban spaces is set to create a brand new city landscape.

The planning application hails the next step of the Unity Square story – and development is likely to commence early in 2019. The contractor is Bowmer & Kirkland.

Jones said: “There is significant long-term investment in this area of the city. Nottingham Train Station was the catalyst and coming up is intu Broadmarsh’s forthcoming redevelopment along with other significant schemes expected over the next couple of years.

“It is an exciting time for Nottingham with many significant schemes on the horizon and cranes expected on the Unity Square site in the next 12 months.

“Looking ahead, the occupiers of Unity Square will be at the heart of this regenerated area of Nottingham, allowing them to take advantage of the multitude of local facilities and excellent transport links.”

“The city council has been proactive in supporting the scheme which has generated strong interest from a number of office occupiers. Now that the existing buildings on site have been demolished, it is possible to see the huge potential for not just this site, but for the city as a whole,” said Nick Sladen, Sladen Estates’ Chief Executive.

“Unity Square is a major piece in the Southern Gateway jigsaw. Unfortunately, Nottingham has struggled to provide Grade A office space over the last few years. Unity Square will help to bridge that gap.

“With hundreds of people working in offices in Unity Square, we see ourselves as helping bring forward an entirely new business community – breathing new life into the southern gateway – and boosting the Nottingham economy.

“There will be significant job creation up to and during the build programme, and once complete local eateries and shops will benefit from the hundreds of people working there.

“Unity Square will benefit from Nottingham’s superb transport links – bus, train and tram -and it will create a magnificent backdrop for commuters arriving from Nottingham Station – providing the sort of dynamic surroundings you’d expect to see as you step from the train in one of the UK’s Core Cities.

“We have strong occupier interest in the site, which is why we’ve submitted a planning application. Peveril Securities and Sladen Estates have an in-depth knowledge of the local market and national development, along with contracting expertise, and has the scale, expertise and resources to bring this scheme to fruition,” Sladen added.

“The scheme indicates the growing confidence in Nottingham as a city which is ripe for both occupiers and developers and we anticipate other substantial interest over the months to come. 2019 is gearing up to be a momentous year not just for Nottingham’s regeneration plans as a whole, but for this area of the city to considerably advance its landscape.”

Peveril Securities and Sladen Estates bought the Unity Square site from Peel Land and Property Group in 2015 for an undisclosed sum. The site came with planning approval for a mixed use scheme of office, hotel, retail and leisure. This new planning submission will supersede the previous application.