Plans for over 1000 student beds in Lincoln approved 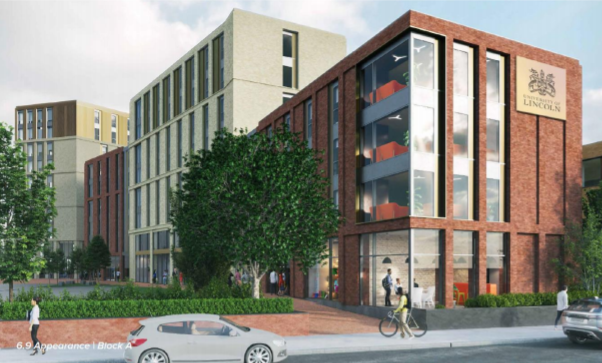 Plans for student accommodation on St. Mark’s Retail Park, Lincoln have been approved after a previous bid from Standard Life Investments was rejected by Lincoln City Council.

The area is currently occupied by a Homebase, Lidl Outlet, Topps Tiles units and part of a BHS unit. Prior approval has already been granted for the demolition of these units, which is underway.

The previous development was rejected because “the design of the proposal [was] contrary to Lincoln’s setting and character.”

The new application will again see the construction of ten blocks of student accommodation, varying in height from four to ten storeys, for over 1000 bed spaces.

Between the blocks there will be space for seating, landscaping and cycle stores,
which would permit public access from outside the site through to the remainder of
the St. Marks development.

To address concerns that led to the refusal of the plans previously, the plane of the elevations and the materials proposed to be used in their construction were revisited.

“The location of additional accommodation in a sustainable location would not undermine this position, rather it would serve the University that continues to grow.

“With this suitably designed development, the implications upon the character of the area and the impact of the development upon general amenities would not have negative
sustainability implications for the local community, as they would lead to a development that would be socially and environmentally sustainable.

“What is more, the development would deliver substantial wider benefits to the city, through improvements to this key area of the city as referred to throughout the report, including in relation to the public realm.”