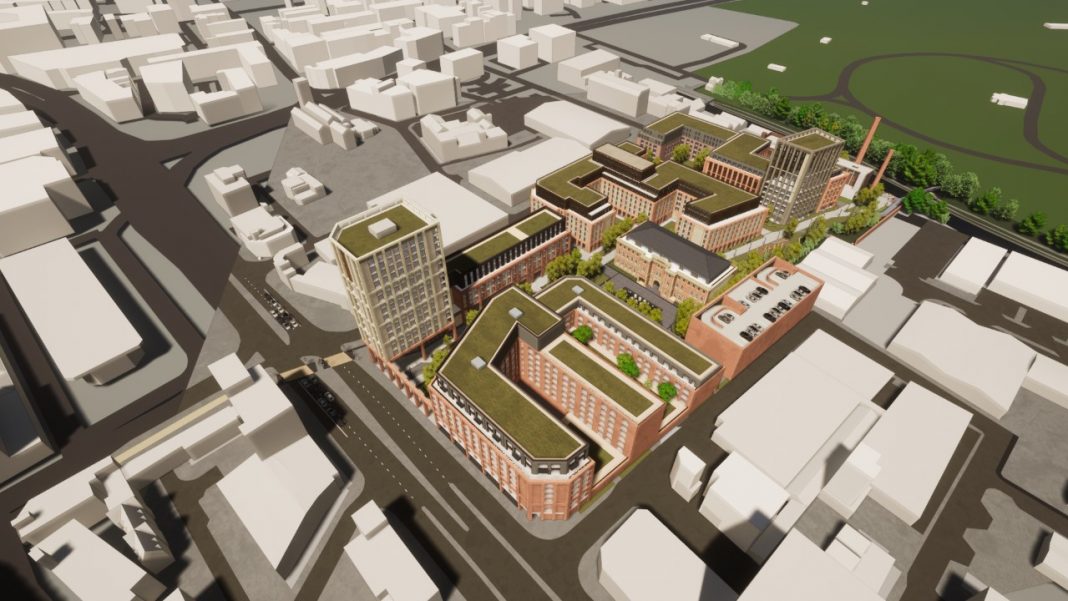 The hybrid planning application, by Cityregen Leicester and Galliford Try Investments, seeks to transform the site into a dynamic new community in the heart of the city with the potential to deliver over 1,000 new homes. The plans include the creation of supporting retail and leisure provision as well as significant public realm on the prominent brownfield site in Leicester’s city centre.

The Corah Site’s industrial heritage will be enhanced, with the principal façade of the Old Textile Building – the oldest building on the site – set to be retained. The Corah Green will provide a new public square, and the two historic chimneys to the rear of the site will act as signposts to the major new destination.

Cityregen Leicester and Galliford Try Investments’ proposal delivers key connectivity, opening up the Corah Site to the public for the first time and creating an exciting new linear park link between Abbey Park and the city centre via a new pedestrian bridge, and the new Burleys Way super crossing.

The City Council has identified the site as an opportunity for regeneration as it falls within the St Margaret’s area of Leicester, a designated Strategic Regeneration Area under the Council’s adopted Core Strategy.

The proposals, which were first unveiled in October 2021, have been informed by an extensive consultation process that engaged with Leicester City Council, local residents and businesses and other key stakeholders.

A spokesperson for Cityregen Leicester and Galliford Try Investments said: “Our transformative proposals promise to unlock the Corah Site and create a new legacy for this important location in the city.

“The plans will bring new life to this area of Leicester, creating a dynamic new community and destination which will act as a catalyst for further growth and regeneration in the area. By delivering a significant number of homes, this site can also play a major role in easing the housing shortages facing local people, while creating fantastic new green spaces and public realm in the city.

“While reinvigorating the Corah Site, our proposals also recognise its important history. Our plans are inspired by this legacy and the heritage of the site has been threaded through the proposals to ensure the people of Leicester are connected to the Corah Site’s past in its new reincarnation.”