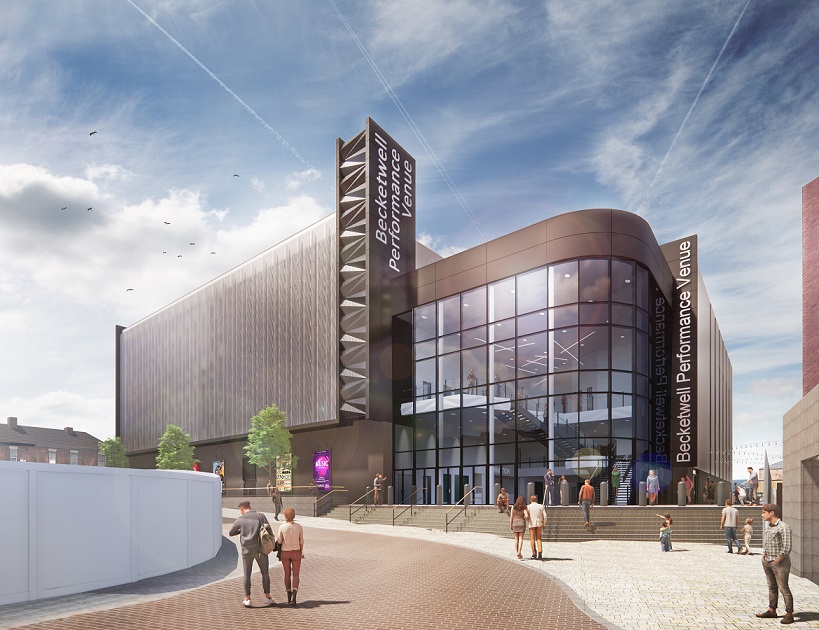 The new performance venue will be located on the site of the former Pink Coconut nightclub and Laurie House offices at the heart of the wider mixed-use Becketwell development.

The main auditorium will have a maximum (seated and standing) capacity of 3,500 and offer a range of different event configurations including a fully seated layout for up to 2,100.

Along with a busy concert and entertainment programme, the venue will also attract a wide range of business events.

The venue is expected to be a significant attraction for Derby, adding a much-needed new cultural venue. It will offer a significantly larger, more flexible space than the city has had in the past and will collaborate with and complement the activities of Derby Arena to provide the best possible events programme for Derby.

The new performance venue will be owned by Derby City Council and run by ASM Global.

It is anticipated the venue will host over 200 cultural and commercial events each year and attract an additional 250,000 visitors to Derby. It is also expected to create over 200 new local jobs, generate more than £10m per year for the area and increase levels of investment in surrounding areas of the city centre.

The planning application is set to be considered at the October meeting of the Derby City Council planning committee and will be accompanied by a range of technical documents covering matters such as traffic generation and car parking, noise, flood risk and ecology.

Subject to planning consent being granted, work on the performance venue is set to commence in early 2022, with handover to the operator in 2024.

Commenting on their plans to bring a new performance venue to the city, Oliver Quarmby, Managing Director of St James Securities, said: “A new large-scale venue is a key component of Derby’s masterplan for the city centre which has been developed collaboratively between the public and private sectors and we are tremendously excited to be working on this ambitious scheme to bring an outstanding, modern performance venue to the city.

“We have created a great scheme which will fill a significant gap in the city’s cultural landscape. This flexible venue will cater for major music and comedy acts as well as a strong programme of theatre content. The conference and events capability will support the growth of the business community in the region.

“The performance venue is set to ‘turbocharge’ the entire Becketwell scheme, allowing us to bring forward a new multi-storey car park and hotel and will be key to the future reinvigoration and repositioning of Derby city centre.

“Our hugely experienced team, led by IPW… with ASM Global as operators, have a long track record in delivering similar projects and have been involved in developing and operating similar arenas including Leeds, Hull, Swansea, Battersea, York, Glasgow, Bradford, Gateshead, Copenhagen, Singapore and Abu Dhabi.”

Work is already underway on phase one of the scheme, which includes the construction of 259 build to rent apartments on the site of the former Debenhams store on Victoria Street and a new public square, with completion by Spring 2023.

Future planned phases of the scheme include a range of other complementary uses of the site including up to 25,000 sq m of new grade A offices and commercial space, a hotel and a multi-storey car park.