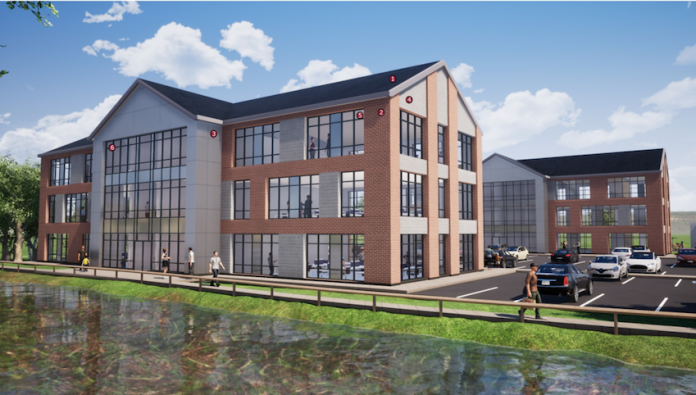 Plans from Harlaxton Estates for the construction of a major mixed use development on land opposite 44 to 26 Fosse Road in Farndon have been refused by Newark and Sherwood District Council.

The application site involves two separate parcels amounting to approximately 4.58 hectares in total, which are currently in agricultural use.

The development, immediately to the south west of the A46 roundabout, would have consisted of a petrol station and associated retail unit and drive through, a Café/Restaurant with ancillary drive through, an electric car charging station, two three storey office blocks and a 103 bed hotel.

390 jobs were slated to be created by the scheme.

A document released by the council ahead of the decision says: “The proposal seeks for a mixed use scheme which, in the applicant’s submission would lead to ‘substantial’ economic benefits including the creation of 390 on site jobs and 150 construction jobs on average. In their view, ‘significant weight’ should be attached to these benefits to render the scheme acceptable.

“To the contrary, Officers have identified significant levels of harm amounting from the proposed development. The granting of consent would compromise the integrity of the Farndon Open Break designation affecting the landscape value of the area. It would introduce development into the functional flood plain with inadequate provisions to appropriately mitigate flood risk.

“The scheme represents other notable compromises including the introduction of two office blocks totaling a height of 14m directly opposite residential properties and the loss of Grade 2 agricultural land.

“Officers do not dispute that the proposal would lead to some economic benefits including the delivery of a hotel to assist in the Districts tourism needs. However, these benefits are in no way considered substantial enough to outweigh all the compounded areas of harm which force the balance firmly towards a recommendation of refusal.”

Tess Egginton - 14th January 2020
rg+p has launched its third studio in the heart of Birmingham’s business district. The practice has taken space at 1 Newhall Street, the contemporary glazed...