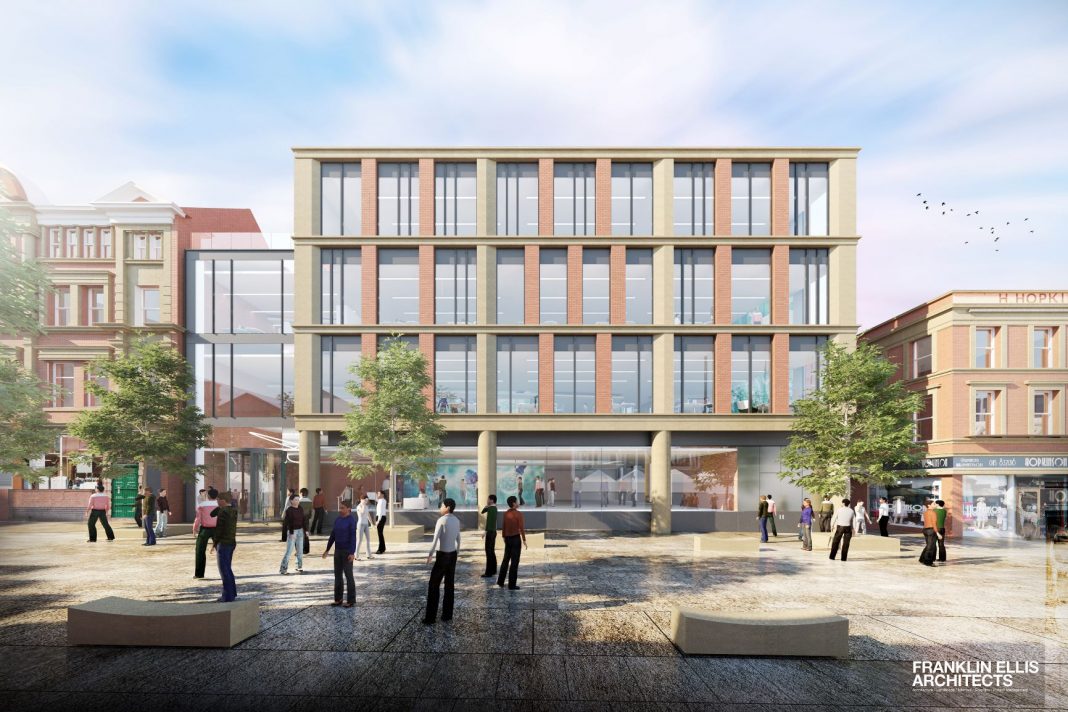 City planners have given the green light to bring forward one of Nottingham’s most striking Grade A office schemes to be delivered in the city to date. The office scheme known as 11 Station Street is part of a major new mixed-use scheme on the doorstep of Nottingham station.

The whole development – the Station Street scheme – includes both Grade A offices at 11 Station Street as well student accommodation by the Vita Group under its Vita Student brand at 25 Station Street. The student element received planning approval last month and will deliver a nine storey 323 bed scheme, with works to start in the Autumn as Phase 1, followed closely by the office scheme as Phase 2.

The office scheme designed by Franklin Ellis Architects, will offer 50,000 sq ft of accommodation, including a stunning feature reception, roof terraces, large light open plan floor plates and car parking, in what will be one of the most efficient office buildings delivered in the city to date.

The site, which is over an acre in size, is a prime location in the city centre, situated opposite to the entrance to Nottingham train station – which has undergone a multimillion pound facelift. Station Street is at the heart of the city’s public transport network.

The approved planning application follows the start of demolition works on site last year, including the removal of the old employment office building which was completed in May this year.

Managing Director at Bildurn Sean Akins said: “We’re thrilled to receive positive feedback from planners on our vision for this historically important, prime location in the city centre. For many visitors to Nottingham, these buildings are the first that they see when they step out of the train station – and as our images show, our vision for the site is quite dramatically different to what has stood there for years.

“Our scheme will see Grade A offices and high-quality residential accommodation reinvigorate the first approach to our city centre, regenerating a large chunk of currently disused and unattractive space in this prime location.

“The two buildings are next to each other, backed by the canal and fronted by a pedestrianised highway, which presents a challenge for the sequence of construction. Following completion of demolition, the residential phase is planned to start in the Autumn this year, now followed by the construction of the adjacent office site at No.11.”

Agents for the scheme JLL have reported how pleased they are with levels of interest in the scheme to date. Director at JLL James Keeton said: “The approval of the planning applications for both elements of Station Street is excellent news for the regeneration of this area and the next chapter in providing certainty to occupiers on delivery.

“We’ve had a range of interested occupiers contact us asking for more detail on the office space and giving solid expressions of interest. No.11 Station Street really will raise the bar in terms of office space delivered in Nottingham to date with a large feature reception, open plan modern floor plates, balcony areas and external ground floor space, all combined with first class on-site staff amenities. Not only this, but occupying one of the best-connected locations in the city.”

The office space which faces the new pedestrianised area on Station Street will offer secure basement parking and cycle storage, 24-hour access, electric car charging points and high quality contemporary finishes as well as backing on to a waterway aspect. The building will also feature a roof garden – which would be one of Nottingham’s first dedicated office developments to offer a terrace for employees overlooking the city.