Nottingham bids for £57m from Levelling Up Fund to unlock potential 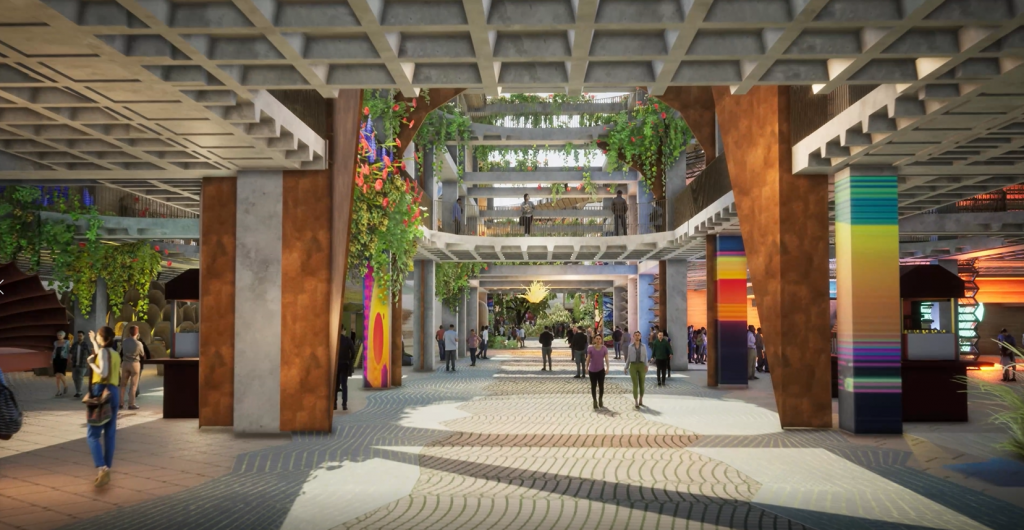 Nottingham City Council is submitting bids totalling £57m to the Government’s Levelling Up Fund to unlock Nottingham’s potential by bringing about massive changes to the city’s Broad Marsh area, Bulwell town centre and the Island Quarter.

The 20-acre Broad Marsh site is one of the most significant City Centre development sites in the UK, with neighbouring streets and buildings already undergoing a transformation and strengthened connections to improved tram, train, bus and cycle networks.

Following the collapse of intu, owners of the former shopping centre, the City Council established the independent Greater Broad Marsh Advisory Group to oversee a bold new vision for the site, informed by an extensive public engagement through the Big Conversation and brought to life by world renowned urban designer Thomas Heatherwick.

If successful, the £20m Broad Marsh bid would prepare the centerpiece of the vision, the Frame of the derelict shopping centre, to be retained and reimagined into a unique space to bring people together in the city for play, performance and food, providing the necessary catalyst and confidence for private sector partners to invest.

This would unlock other key elements of the vision including:

Bulwell town centre sits in the tenth most deprived constituency in England and is in need of investment which will boost pride in the area, improve key amenities and links to transport services. Nottingham’s £20m bid for Bulwell would see:

The 36-acre Island Quarter site is 500m from Nottingham Station yet had been derelict and blighted for over three decades before work started on the first phase of a major redevelopment.

The £17m Levelling Up Fund Island Quarter bid, being submitted on behalf of developers Conygar, focuses on renovating three heritage warehouse buildings at the heart of the site, bringing them back into productive use providing a community open theatre and much needed creative and digital studio space, and connecting them into the city and local neighbourhoods. Access would be improved for pedestrians, cyclists and vehicle users with an upgraded junction connecting the site to the Sneinton community.

City Council leader, Cllr David Mellen, said: “We believe that Broad Marsh is perhaps the most significant development site in the country right now and that our ambitious proposals offer a chance for Nottingham to re-imagine the future of city centres and uplift not just the Broad Marsh, but support jobs and growth for the wider city and region, unlocking benefits for us all and future generations.

“A successful bid for the Frame would help unlock the wider vison for a new ‘green heart’ for the city, rejuvenating the caves and creating new homes, jobs and business opportunities. We would also look to increase footfall, visitor numbers and cultural participation ahead of development getting underway, through a programme of events and activities which continue the Big Conversation and engage people in shaping the future of their city centre.

“Bulwell town centre has great potential which deserves to be realised and our bid will enhance some of the key elements that make the town special. The market and the riverside area will be given the love and attention they need, along with the sort of shopfront rejuvenation which has made such a difference in parts of the city centre and thoughtful public realm improvements including a Bulwell Promenade.

“The Island Quarter is a key site next to the city centre for which ambitious plans are already underway but support from the Levelling Up Fund would help enhance further creating opportunities and improving access for local communities.

“These bids are the absolute essence of what Levelling Up should be all about, so we are hopeful of success.”

Lilian Greenwood, MP for Nottingham South, said: “Regeneration of Broad Marsh has been long overdue and the project is a top priority for our city.

“Access to Levelling Up Funding would ensure the completion of the project and would provide a unique opportunity for local residents and businesses to secure and create jobs and generate major investment.

“As supported by many Nottingham residents, the funding would also allow for new green space to be created as part of the redevelopment, supporting the city’s ambition to be carbon neutral by 2028.”

Greg Nugent, chair of the Greater Broad Marsh Advisory Group, said: “This is amazing progress on Broad Marsh, rooted in the vision we love but practical next steps needed to start the big build. This is an unmissable opportunity for Government and the whole idea of levelling up to unlock our potential as a city.”

Alex Norris, MP for Nottingham North, said: “Bulwell is a fantastic community with a thriving market, but the growth of online shopping combined with the current cost of living crisis has hit the town centre hard. This ambitious bid gives us the opportunity to really boost the area and I’m proud to give it my support.”

Robert Ware, Chief Executive of the Conygar Investment Company, said: “While Conygar already has investment in place to support the regeneration of The Island Quarter and its various phases that make up the site, the Levelling Up Fund will allow us to accelerate our work so that Nottingham can make the most of the economic benefits of The Island Quarter as quickly as possible.

“With monies from the fund, Conygar will be able to proceed immediately with the refurbishment works to the two incredible heritage warehouses on the site to bring them back to life.”

Nick Ebbs, chair of Nottingham’s Growth Board, said: “The city’s bids can deliver what Levelling Up aims to achieve – investment in infrastructure that can make a real difference to local communities; creating jobs and opportunities for people and businesses in Nottingham, Nottinghamshire and the wider East Midlands region.”