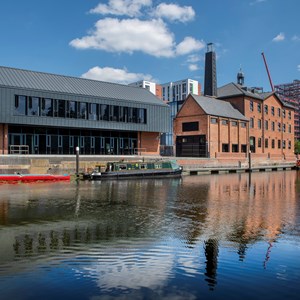 A landmark riverside development at the heart of Leicester’s Waterside regeneration area has been boosted by the completion of over 10,000 sqft of new, purpose-built office space.

The £2.3million city council-led development has created two modern offices – the 5,500sqft Riverside building and the 4,900sqft Fabric building – in the grounds of the historic Friars Mill development on the banks of the River Soar.

The development of the new offices was carried out by Leicester-based Brackley Property Developments, which appointed Andrew and Ashwell as marketing agents.

The design and materials of the two new buildings is sympathetic to the character and industrial heritage of the surrounding 18th century mill complex, which the city council painstakingly restored as part of an award-winning £7.1million redevelopment scheme.

The new offices represent a second phase of the redevelopment of the historic grade-II listed complex and will significantly increase the amount of modern workspace available at Friars Mill. The original buildings are all now fully occupied.

City Mayor Peter Soulsby said: “The transformation of Friars Mill is remarkable. In 2012, we were facing the loss of an important part of the city’s industrial heritage when the derelict Donisthorpe Factory was nearly destroyed in fire.

“The council stepped in and bought the building, pledging to restore and redevelop Friars Mill as a beacon for the wider regeneration of the Waterside and to help kickstart development on the ‘other side’ of Vaughan Way.

“These new offices are further evidence of how effective this has been. Friars Mill is at full occupancy and I am confident that these attractive new offices will be snapped up.

“I want to congratulate Brackley on a wonderful job, which has created new and much-needed modern office buildings that sit perfectly alongside some of the oldest factory buildings in the city.

“Alongside the new developments taking place on Vaughan Way, these new offices represent a very important step forward for Waterside and its future as a great place to live and a thriving area for new business.”

Stephen Pedrick-Moyle, managing director of Brackley Property Developments, said: “We were thrilled to be given the opportunity to be involved in this development and to help build on the success of Leicester City Council’s restoration and redevelopment of the historic Friars Mill complex.

“These two new buildings offer over 10,000sqft of high quality, purpose-built office accommodation in a fantastic riverside location at the heart of Leicester Waterside regeneration area.

“We’re proud to be able to report that we have already sold the Riverside building and that there is strong interest in the Fabric building.

“We’re now looking forward to continuing this success with future office development in the Waterside area.”

The £2.3million scheme to build new offices at Friars Mill was supported by £1million of Government cash through the Local Growth Fund by the Leicester and Leicestershire Enterprise Partnership (LLEP)

Minister of State for Local Growth, the Rt Hon Jake Berry MP, said: “We’re committed to boosting economic growth across the whole of the Midlands Engine and ensuring every community has the support and investment it needs to flourish.

“I am delighted to this investment from the Government’s Local Growth Fund enabling regeneration in the historic Friars Mill development. This new state-of-the-art office space will support local businesses while protecting the character and heritage of this iconic part of Leicester on the banks of the River Soar.”

However, work stalled when the original contractor William Anelay Ltd went into administration.

Leicester City council then engaged Brackley Property Developments who have taken the project through to completion.

The company will now be working with the city council to develop the first of the new office developments promised as part of the first phase of the development of the Waterside area.

This will involve the phased construction of 60,000sqft of new purpose-built office on council-owned land at Northgate Street. Work is expected to get underway early in 2020.