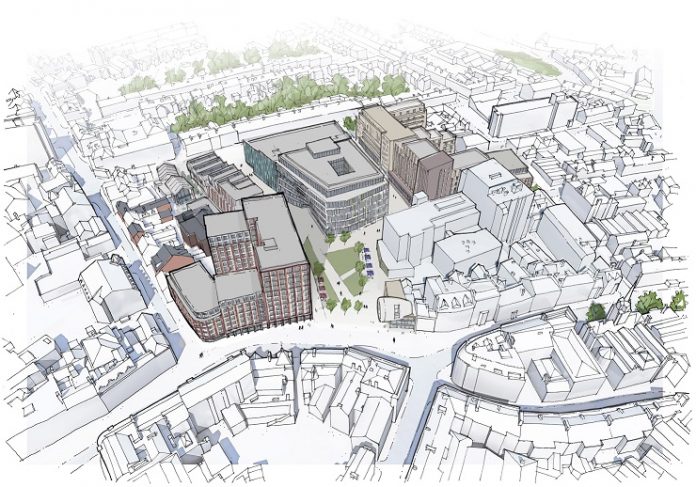 Modifications to the £200m regeneration plans for the Becketwell area of Derby city centre, announced in December, have been approved by the city council.

The refreshed plans from St James Securities, saw the developers behind the scheme scale back its residential element, which will be located on the site of the former Debenhams store on Victoria Street.

The original plan was to create 342 Build to Rent apartments in two buildings, the tallest of which would extend up to 19 storeys in height and contain 246 apartments, with 96 apartments in a second, smaller building.

The larger building will now be reduced to approximately 224 apartments over a maximum of ground plus 10 storeys. The second smaller building fronting Green Lane and Victoria Street will be ground plus 4 storeys and will be developed separately.

The new multi-purpose public square on the site of the current United Reformed Church remains the centrepiece of the development and will continue to be delivered as part of phase one.

The rest of the submitted planning application which includes a range of other complementary uses of the site, including up to 25,000 sq m of new grade A offices, innovation centre and leisure to complement the residential and a planned multi storey car park with a smaller more intimate courtyard public square, remains the same.

Commenting on the decision to modify the residential element of the scheme, Paul Morris, director of St James Securities, said: “Our scheme has been the subject of careful re-design in consultation with potential Funders and their belief is that given the continuing economic uncertainty in the wider UK market in general and the lack of precedent in the Derby market in particular, a scaled-back residential element on the first phase will prove the best market fit.

“We are also conscious that concerns have been raised by individuals and organisations including the Derby Civic Society and conservation groups.

“As responsible developers, we have reviewed these concerns, alongside the results of our own detailed discussions with our wider project team and decided to implement changes to address these issues. However, although we have scaled back the size of the residential element of the scheme, the build quality will remain at the highest level.

“We are committed to delivering a comprehensive regeneration scheme for Derby city centre which will be fundable and above all implementable. We are currently working with a select number of Funds who are keen for us to deliver a scheme that is a suitable fit for a city the size of Derby.”

The regeneration of the Becketwell area of the city is expected to bring a repopulation of both office workers and residents to the city centre which will help boost activity outside of traditional retail hours. It is also hoped that the substantial levels of investment proposed at Becketwell will provide confidence for further new investment in surrounding areas of the city centre.

Outline plans submitted for Daventry Urban Extension that could create 3,400...