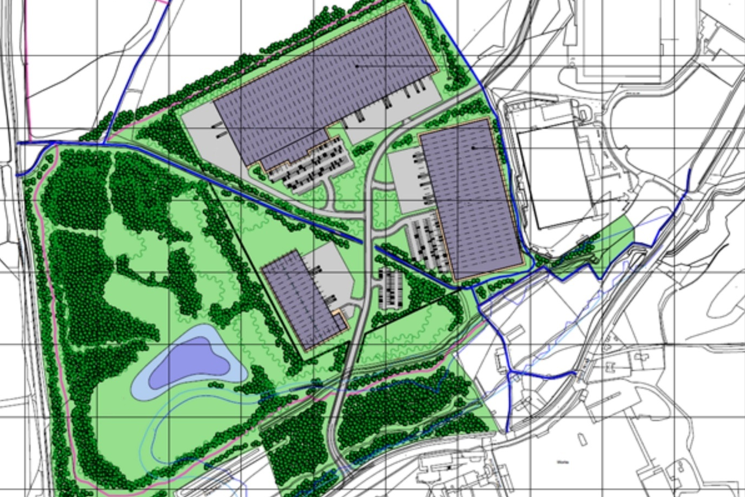 Outline planning permission, with all matters other than access, for an extension to Denby Hall Business Park has been granted following a positive appeal decision.

The successful appeal, following a Public Inquiry, is one of the largest permissions of its kind which will help create jobs and boost the local economy of Amber Valley. On behalf of their client, Planning & Design Practice Ltd were able to demonstrate that very special circumstances did exist for development within the Green Belt, including the economic benefits of significant job creation and retention.

The outline proposal sought the erection of 3 industrial buildings to expand the Business Park to provide a new Production Facility for Garner Aluminium Extrusions Limited, a new Warehouse for HL Plastics Limited and a new Production Facility for LB Plastics Limited. The development would cover 16 hectares of land for industrial development with the land to the west providing biodiversity mitigation. Approximately 423 parking spaces would be provided on site to serve the development.

Collectively, these companies have led the delivery of new window frame manufacture in the UK since the 1970s. Their products have been installed in hundreds of thousands of homes, offices and other buildings across the UK. They occupy an important role in the manufacturing sector for the UK’s construction industry, with an expanding international market.

Planning & Design Practice Ltd say the development is necessary to allow these businesses to grow existing operations, as they now require larger, purpose-built production space. There were no other equivalent sites capable of providing the required space in the Borough, alongside the benefits of concentration of activities.

The companies employ 700 individuals altogether and the delivery of the scheme will allow the retention of 100 jobs and the creation of a further 680 new jobs in the first 5 years, in a range of skilled occupations. This makes the companies one of the larger manufacturing employers within Derbyshire and Amber Valley, and within the immediate local area (including the towns of Alfreton, Ripley and Belper). They therefore contribute significantly to the local economy, directly and indirectly, and have led in the transformation of the local economy following the closure of Derbyshire collieries from the late 1960s onwards.

The scheme demonstrated that it would provide social, economic and environmental benefits which have been attributed significant weight. Combined with the specific type and nature of the scheme, the context of the site and the lack of alternative provision of employment land, the Inspector concluded that “the other considerations in this particular case clearly outweigh the harm by reason of inappropriateness and the harm to the openness of the Green Belt.”