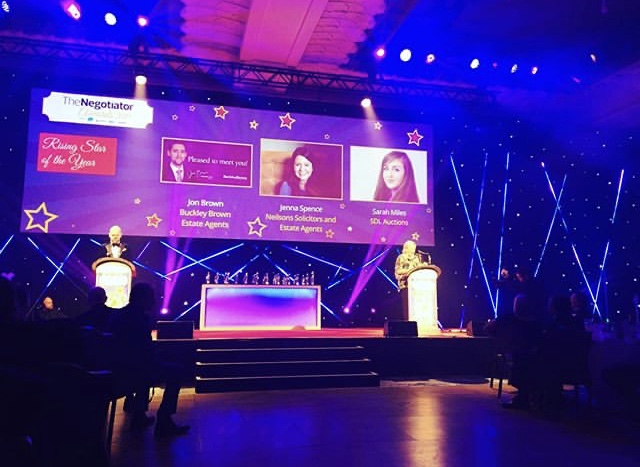 SDL Auctions’ Regional Property Manager Sarah Miles has been honoured in the prestigious Negotiator Awards, taking Bronze in the Rising Star of the Year category.

It’s a huge accolade for Sarah, who manages both online auctions and room auctions in the North West.

Managing Director and Auctioneer Andrew Parker said: “We are so proud of Sarah’s achievement in winning the Bronze award in the Rising Star of the Year category, which is particularly impressive when you consider how many people were in the running for the top honour. There were 24 people on the shortlist, so to win the Bronze is an admirable achievement – and very well deserved.”

Sarah, 26, joined SDL Auctions just after graduating in 2014 and has been steadily rising through the ranks ever since. Beginning her career in property as an auction administrator, within two years she was promoted to Nottingham Property Manager with her own team of auction administrators and overseeing six auctions a year at Nottingham Racecourse. She was promoted to her current role of Regional Property Manager earlier this year and now manages both online auctions and room auctions in the North West.

Andrew added: “Ever since she joined the company, Sarah has shown herself to be an invaluable member of the SDL Auctions team and we are thrilled that her hard work, calm approach and professional attitude have been recognised in these prestigious awards. Sarah has always been a rising star at SDL Auctions – and now she has the award to prove it.”

Known as the property ‘Oscars’, The Negotiator Awards is the residential property industry’s leading awards programme and competition is fierce, attracting its largest number of entries in 2019. After being judged by respected leaders and experts in the industry, the awards were presented by top comedian Tom Allen at a glittering gala dinner held at Grosvenor House, Park Lane, London and attended by 900 guests.

Sarah said: “I am so grateful for all the training and support I’ve received from my colleagues at SDL Auctions who have helped me to achieve this award. It was such a great honour even to be shortlisted, so to take Bronze was amazing and I could hardly believe it when my name was read out. It was fabulous to see Tom Allen, too – he was hilarious.”