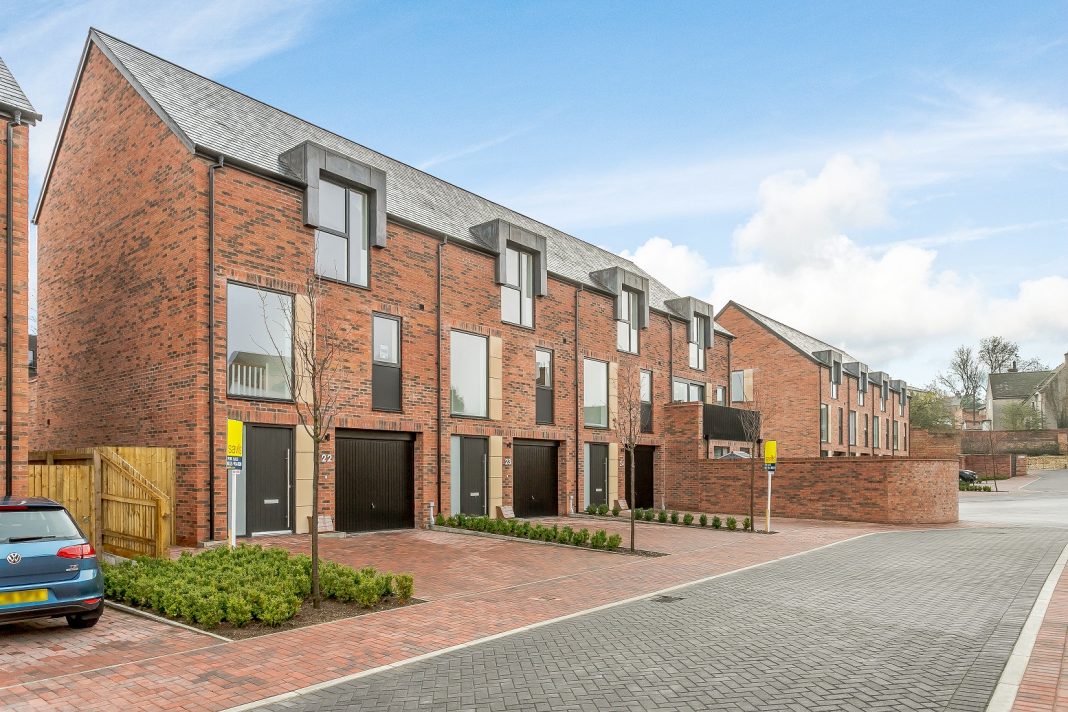 Nottingham-based Franklin Ellis Architects has completed a housing redevelopment of a Grade 1 site that is steeped in history, in Southwell in Nottinghamshire.

The Becher’s Court development features a collection of 32 contemporary one to four bedroom terraced and semi-detached houses, townhouses and apartments, and is based just a stone’s throw away from Southwell Minister.

The site has an extensive history and was formerly occupied by the Nottinghamshire House of Correction, which was built in 1808 by the Rev. John Thomas Becher and closed in 1880. It was later used by Henry Carey as a curtain lace factory in the 1900s. During World War 2, the company swapped its production of net curtains for sand-fly, mosquito and camouflage netting to help in the war effort.

To celebrate the collaborative nature of this project and to mark its completion, a plaque has been unveiled which details the history of the site and reveals some of the inspiration for the redevelopment which harks back to the site’s heritage, keeping some of its most interesting features intact.

Joe Taylor, partner at Franklin Ellis Architects, said: “The collective approach we have taken with this development, with support from the local authority conservation officer and historian Rob Smith, has meant that we have created a modern living environment in a sought-after area that recognises its considerable historical significance.

“It has been a pleasure to work alongside Gusto Homes on this unique project which is sympathetic to and enhances the site’s heritage. Personally, it has been wonderful to oversee the scheme from both an architectural and developer perspective”

Steff Wright, owner of Gusto Homes, said: “To achieve the amazing transformation of the Becher’s Court site has required great vision from our design team, confidence and trust from our investors and hard work with attention to detail from our construction team. Seeing this historic site in the heart of Southwell brought back to life and creating a new community of homes in the region is an achievement we are all very proud of.”

Councillor Roger Blaney, Planning Committee Chairman and Heritage Champion at Newark and Sherwood District Council said: “The former house of correction site is an important heritage asset within Southwell and was in very poor condition. By working collaboratively with the local community, Gusto and heritage professionals, the redevelopment has breathed new life into these historic buildings. The finished development is an excellent example of heritage-led regeneration.”

Local historian Rob Smith added: “All of the local heritage groups were very pleased that the developer approached us with a plan, not only to preserve and make full use of the existing buildings, but also to reflect former demolished buildings in new parts. The classic prison design included interesting shapes and angles that must have been a challenge, but the effort is fully rewarded in this distinct and unique housing development.”

The development team are continuing the joint venture partnership and are currently in the design stages for a new residential development in Easthorpe, Bottesford.