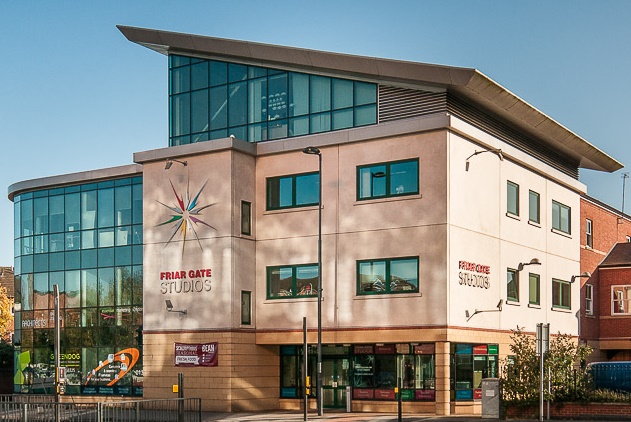 Friar Gate Studios and Sadler Bridge Studios, regarded as a hub of Derby’s creative industries, have been given the green light to expand the range of businesses their space can be let to.

Up to 30% of their space will now be let to tenants from across the creative industries supply chain, including professional service companies such as accountants, lawyers, financial services and HR professionals, along with education and training companies.

When Friar Gate Studios was launched in 2007, it received funding from the European Regional Development Fund (ERDF). The funding secured was to promote the development of the creative sector in the city, with only businesses operating in the creative sector eligible to take space there. The same applied to Sadler Bridge Studios, which opened its doors in Spring 2014.

Now, however, the Ministry of Housing, Communities & Local Government (MHCLG), who administer the fund, has agreed a relaxation of the criteria in order to further promote entrepreneurship within the city.

This change will allow a wider range of businesses to operate from the two studios and is aiming to promote collaboration by giving creative businesses access to a range of complementary services.

Speaking about the relaxation of the criteria, Ann Bhatti, head of Connect Derby, said: “Friar Gate Studios has been the hub for Derby’s thriving creative community for almost 13 years and Sadler Bridge Studios has enjoyed similar success since it opened almost five years ago.

“We have created a wonderful working environment in both buildings and are really pleased we can open them up to businesses involved in the creative industries supply chain.

“This is an exciting new chapter in the life of two of Derby’s best-known managed workspaces. We look forward to welcoming new tenants to Friar Gate and Sadler Bridge Studios and giving them the support they need for their businesses to flourish.”

Tess Egginton - 19th February 2020
Nottingham-based housebuilder Avant Homes has been given the go ahead for a new £60m development in Ruddington, after planning permission was granted by Rushcliffe...

Outline plans submitted for Daventry Urban Extension that could create 3,400...