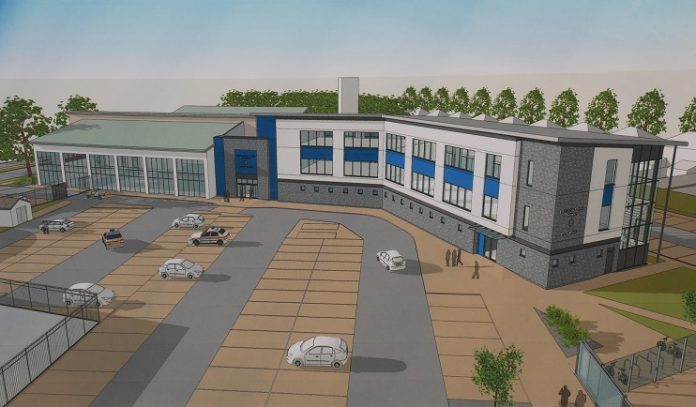 A new multi-million-pound police station in Derby will go ahead after a deal with the landowner was agreed.

Derbyshire Constabulary has signed contracts with Ivygrove Developments after a deal was brokered by Salloway Property Consultants.

The £9.5 million development will be linked to the existing fire station in Ascot Drive.

Operational costs for both Derbyshire Constabulary and Derbyshire Fire and Rescue Service will be reduced by sharing the facilities and services of the two linked stations.

Planning permission has already been granted for the station which is on Ivygrove’s Dunstall Park site on a vacant former Rolls-Royce site and car park which faces on to Osmaston Road.

It will replace the ageing Cotton Lane police station after it was deemed that repairs would be too expensive and unfeasible.

More than 200 staff will be based at the station where policing of football at nearby Pride Park Stadium will be centred.

“This development is the first significant co-location away from the joint Headquarters and Training Centre at Ripley,” he said. “We have seen the benefits of this close working relationship, never more so than during the Toddbrook Reservoir incident earlier in the year.

“This new station, part of our ongoing estates plan, will make a tangible difference to policing in Derby and the south of the county. It will provide better facilities for all staff, partners and the public, with an up to date, fully equipped station providing an environment that will be fit for purpose for many years to come.

“It will provide better value for money for the public purse than the refurbishment of Cotton Lane station and I’m proud to see these plans moving ahead.”

Stephen Salloway, Managing Director of Salloway Property Consultants, the agents of Dunstall Park said: “This is a major development for Derby on an excellent site.

“Derbyshire Constabulary has worked closely with us and it has been fascinating to see the way in which they intend to create a building which is in sync with the needs of the community in the 21st century.”

John Blount, Chairman of Ivygrove Developments, said: “We are delighted that Derbyshire Constabulary should take advantage of this site. All partners have worked hard to get the deal over the line and we are pleased that it has now been done.

“Dunstall Park is designed to accommodate a range of uses including workshops, warehouses, trade-counters and the like and I believe the new police station will be the ideal neighbour for incoming organisations and businesses.”

Tess Egginton - 27th February 2020
Machinery has now moved onto site to develop the last phase of an industrial/warehouse scheme which sits next to the main Rolls-Royce Civil Aerospace...