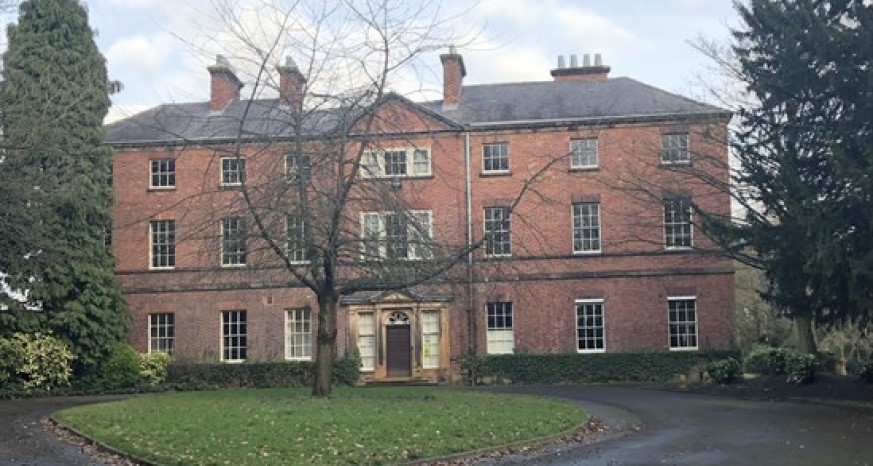 A new owner or tenant is being sought for Tapton House in a move designed to safeguard the long-term future of this historic Chesterfield site.

Backed by Chesterfield Civic Society, Chesterfield Borough Council has taken the decision to advertise Tapton House in Brimington for sale or rent – with a view to bringing the empty Grade II* listed building back into use.

Dating back to 1794, the building was built by local banking family, the Wilkinsons. It was then briefly occupied by railway pioneer George Stephenson (from 1838 to 1848) before becoming the home of the Markham family from 1873 to 1925.

It was subsequently given to the former Chesterfield Corporation by Charles Paxton Markham, who expressed the hope that it would be used for the benefit of the people of the town, leading to the creation of the former Tapton House Secondary School which occupied the site until 1991. Chesterfield College then took over the building as a base for its Higher Education provision before returning Tapton House to the council in 2018.

Councillor Dean Collins, Chesterfield Borough Council’s cabinet member for economic growth, said: “Tapton House and the surrounding area is a key heritage site in our borough, and we’re committed to finding a long-term solution that will safeguard and conserve its future.

“Since the college vacated the building three years ago, we have overseen its general repair and maintenance while looking for a suitable tenant – but are becoming increasingly concerned about incidents of vandalism and arson in the nearby Tapton Park.

“The council, just like the people of Chesterfield want the best for Tapton House, which is why we’re now keen to attract a new owner or tenant who is prepared to make the substantial investment needed to restore and refurbish the building to a standard fit for occupation.”

Philip Riden, chairman of the Chesterfield Civic Society, said: “The Civic Society committee believes that the best chance of securing the future of Tapton House is for it to be sold by the Borough Council on a long lease with planning permission for change of use back to a private residence.

“If necessary, this could be coupled with the demolition of the school buildings of 1931, which are of no special merit. Public access to the grounds could, we believe, be maintained alongside the creation of a private garden attached to the mansion.”

The property will be available for sale on a long leasehold basis for a term of 999 years at a fixed peppercorn ground rent, or to let on a new lease on commercial terms.

A number of uses will be considered, subject to appropriate consents being in place – and any final decision on the sale of Tapton House will be taken by the council’s Cabinet.

Under the terms of any sale or rental agreement, there will be a small private outdoor area for the exclusive use of the new owner or tenant but plenty of parkland left for residents to walk around and enjoy views of Tapton House.

The building will be marketed by Knight Frank.