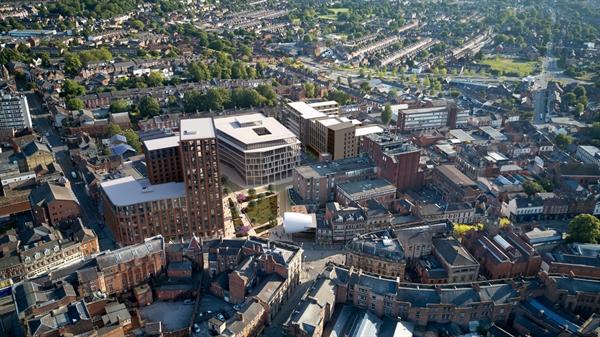 Local residents, business owners and key stakeholders from across the city have thrown their support behind plans for the regeneration of the Becketwell area of Derby, part-funded by D2N2.

An outline planning application was submitted at the end of August after contracts were exchanged between Leeds-based developer St James Securities and Derby City Council on the former Debenhams department store in Derby and surrounding sites including the former Pennine Hotel, NCP Car Park, and Laurie House on Colyear Street.

This followed a public consultation event in March which generated a positive reaction to the scheme of over 95%.

Now, residents, business owners, and key stakeholders have been invited to comment on the scheme ahead of a planning decision which is expected to be made before the end of the year.

To date, more than twice as many letters of support have been received in favour of the revitalisation of an area which has long been derelict, attracting crime and anti-social behaviour.

D2N2 invested £8.1 million into the Becketwell scheme from its Local Growth Fund allocation.

The residential development will comprise of two buildings, the tallest of which will extend up to 19 storeys in height.

In response to local feedback, the smaller of the two buildings has been carefully designed to retain the curve of the existing buildings to the Victoria Street frontage.

The site will allow for a range of uses in addition to residential, and will include up to 25,000m2  of new grade A offices, an innovation centre and leisure to complement the residential and a planned multi-storey car park, and a smaller courtyard public square called Summerhill Yard to reflect that part of the site’s historic street name.

Business leaders and other key stakeholders have been unequivocal in their support for the scheme, citing the benefits that a revitalisation of this area of the city centre would bring for the surrounding businesses and community.

D2N2 Chief Executive Sajeeda Rose said: “D2N2 is very supportive of proposals that will help to stimulate the local economy through the development of housing and employment led growth. Through the ambitious plans that are being set out in this outline planning application, we see the Becketwell development as being able to facilitate that ambition.”

John Forkin, managing director of Marketing Derby said: “It is imperative that Derby continues to revitalise the centre to deliver Derby City Council’s Masterplan. The proposed Becketwell regeneration improves the vibrancy, brings derelict buildings and vacant land back into use, and supports the city centre economy, whilst relieving pressure on green belt land.”