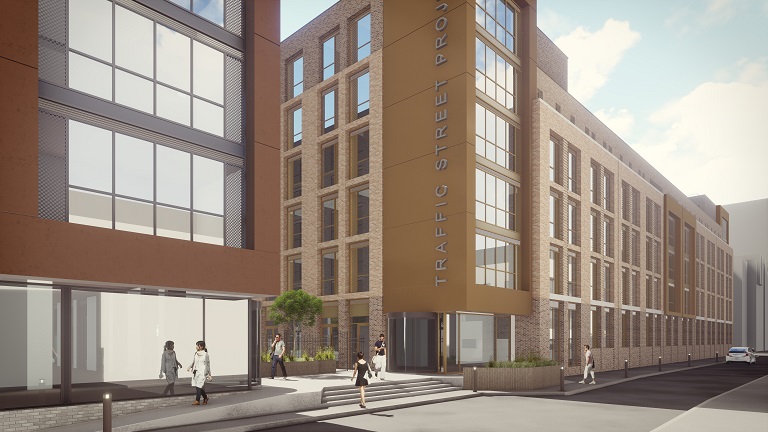 Jensco Group’s proposals to build a development of purpose-built student accommodation on a largely cleared site between Traffic Street, Waterway Street West and Sheriffs Way, in Nottingham, have been recommended for approval.

The student scheme will consist of two buildings of up to six floors and feature 62 shared cluster flats and 163 studios. 522 rooms will be provided in total.

Flexible spaces, event and cinema rooms as well as communal open spaces in courtyards and a ‘central street’ would also be provided.

The development location has a varied history. It was used to grow crocuses to harvest saffron before later, in the more recent industrial past, being the location of a former industrial print works.

Most recently, the site has laid empty as a brownfield site, leaving Traffic Street — still the home of the Castle Rock Brewery and one of Nottingham’s past historic industrial areas — unrecognisable from its industrial heyday.

Part of an office building remains on the site, which would be demolished for the development.

Upon launching a public consultation in January, Nigel Bobroff, Director at Jensco Group, said: “Jensco Group has a significant knowledge of the East Midlands with developments including the award-winning One Friar Gate Square for the University of Derby School of Law and Social Sciences and Agard Court, student housing also for University of Derby.