Approval in principle for 160 homes at Derbyshire brownfield site 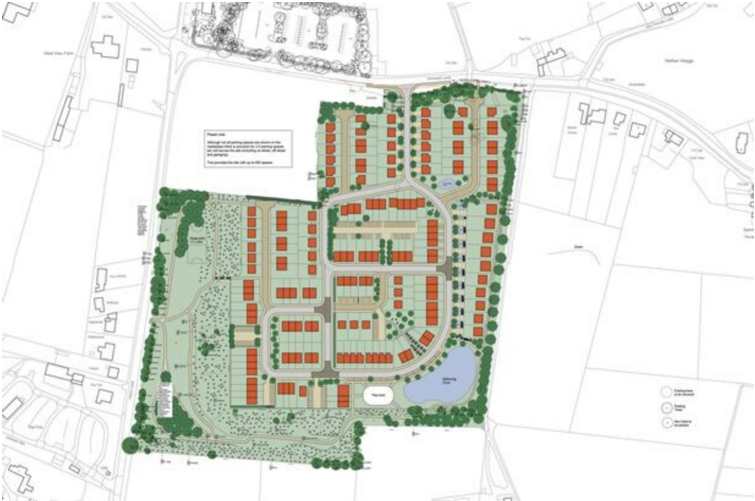 Planning & Design Practice Ltd has secured approval in principle for 160 new homes on a large brownfield site near the village of Nether Heage, Derbyshire.

Its client’s scheme for 160 dwellings was the first item to be decided on the agenda of an Amber Valley Planning Board meeting held virtually on Zoom on 15 June.

There were three objectors to the scheme, with the main concern involving the increase in people who would live in the village and use local services including Heage School. The objectors saw it as a problem of an increase in traffic and pedestrian vehicle conflict and congestion around school times.

Work done with the applicant to reduce the numbers of homes, address issues around drainage and importantly reduce the site area itself so that land within the Green Belt was not included was welcomed. The application was approved unanimously.

The next step is the Section 106 to cover matters of off-site funding and monitoring.

Previously on the site the committee approved a slightly larger scheme which included green belt land (as open space), but revoked their decision before the Decision Notice was issued due to changes in the local plan. This led to the application being re-presented to committee and refused last year.

The appeal on the larger scheme will continue to run.

The client’s legal advisers will be working with the council to agree the Section 106 over the coming weeks.

Jonathan Jenkin, Managing Director of Planning & Design said: “Getting planning permission on this site has been very frustrating for me and for our client. We had an approval in principle back in the spring of 2019, over 12 months ago.

“The Section 106 legal agreement had been signed and we were just waiting for the Decision Notice to be issued. A day before we were expecting the Decision Notice, the council pulled the application on the grounds that having dropped the Local Plan, they had a 5-year housing supply.

“This led to the previous application being re-presented to the planning committee. There had been a change in political control after the May 2019 local election and the new controlling group refused the application on thin grounds, but principally because the application site area included green belt land even though this land was not going to be built on.

“We submitted an appeal, but we also amended the proposals to address some of the concerns that had been raised. We expect that the Decision notice will be issued shortly and that a further reserved matters application can follow on.

“A change in political control can have ramifications for development and for developers. Delay is a cost which is often overlooked. It also required our client to pay for revised proposals and for an appeal submission. Running an appeal can be very useful where a council has refused an application on political grounds not planning grounds.

“The impact of a costs claim and the political ramifications can be great particularly if another political group seek to use it to highlight waste in the council through poor decision making. An appeal can strengthen your position, and whilst it needs to be there and be known it should not be used explicitly at planning committee.”

Roger Hartshorn, Director, Garner Holdings Ltd said: “This is great news for Nether Heage and will ultimately provide a perfect backstop for the historic windmill. The houses are needed within the area and will also give the benefit of stopping commercial vehicles winding through the village. We are now actively looking and working with AVBC to find an alternate site so that the employment and jobs can be retained within the locality.”