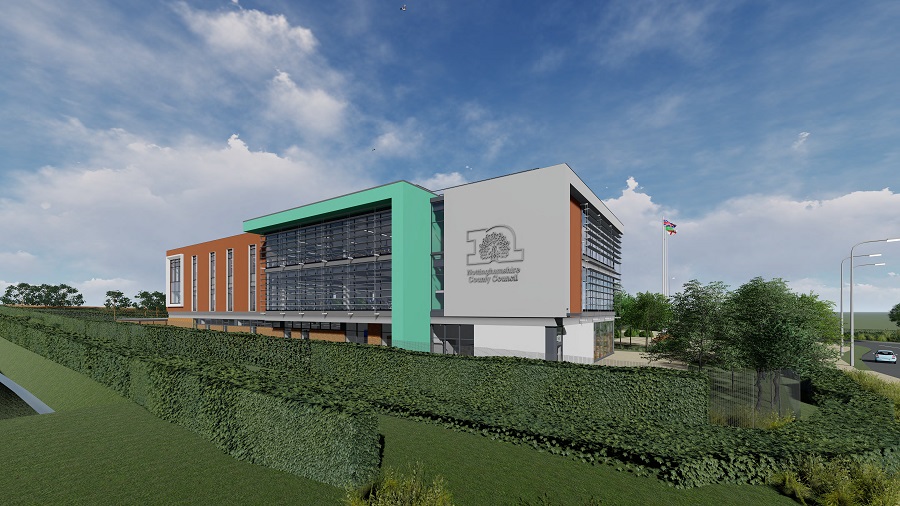 Ambitious, carbon-reducing investment plans, with residents’ needs at the heart of them, are set to move to the next stage – with images of the planned new building at Top Wighay revealed for the first time.

Nottinghamshire County Council’s Economic Development and Asset Management Committee will next week (Tues 2 Nov) hear how plans for the council offices have been reviewed in light of the pandemic and more flexible working, reducing the costs of the scheme by almost £7 million.

The revised £20.9 million* investment will bring long-term savings for the taxpayer by creating more carbon-neutral buildings, generating income by leasing space within our buildings, and co-locating with other public organisations.

New Council offices located at the planned new, sustainable village at the site of Top Wighay Farm, near Hucknall, which aims to bring major regeneration to the area, is set to move to the planning stages, once rubber stamped by councillors next week.

As part of this process local residents will get an opportunity to feedback on plans via consultation through the statutory planning procedures.

The planned new village will bring more than 800 new homes and a new primary school. It is estimated this will create more than 1,000 new full-time jobs and boost the economy by more than £873 million over a decade.

Five developers are currently tendering for the residential element of the planned new village, with a decision planned next Spring.

Committee chairman, Councillor Keith Girling, says:“As we recover from the pandemic, we want to significantly reduce the Council’s carbon emissions by making our buildings more energy-efficient.

“We have made a clear pledge to help meet the UK’s carbon-neutral targets by 2030 so it’s vital we invest now.

“The planned new building at Top Wighay will house services such as social services, which are currently based in leased office space which we are paying out for.

“These major plans will benefit communities across the county as we aim to save money and improve quality. We will move out of buildings we pay rent for, bring services closer to the residents who need them the most, which will cut down on their travel time and help the environment.

“We have focused on improving our buildings which offer front-line services such as contact points which are used by parents and young children, including looked-after children.

“These buildings are now old and far from ideal, which we are having to regularly address, so we need to put this right.

“Let’s not forgot this investment will provide lucrative refurbishment and building contracts for local subcontractors, so it will really benefit the local economy and local jobs.

“We are also looking into potential plans to move some council services in Mansfield into a potential public services hub, planned by Mansfield District Council as it looks to move into the town centre.

“It is early days, but this approach makes sense as we look to share resources and make council building more multi-functional and include things like conference facilities and potentially libraries.

“We are already co-locating with a local NHS team in our Sir John Robinson offices in Arnold, which is generating income and making best use of space and resources.”

“With hybrid working now being the norm for many of our staff, we’re reducing from 17 to 9 offices.

“However, as one of the county’s biggest employers with many staff in public-facing roles or still being office-based from time to time,  having workplaces which are fit for purpose and in the right place around the county, forms part of the thinking behind these plans.”

This programme of activity, known as ‘Investing in Nottinghamshire’ is being delivered though the Arc Partnership, on behalf of Nottinghamshire County Council.