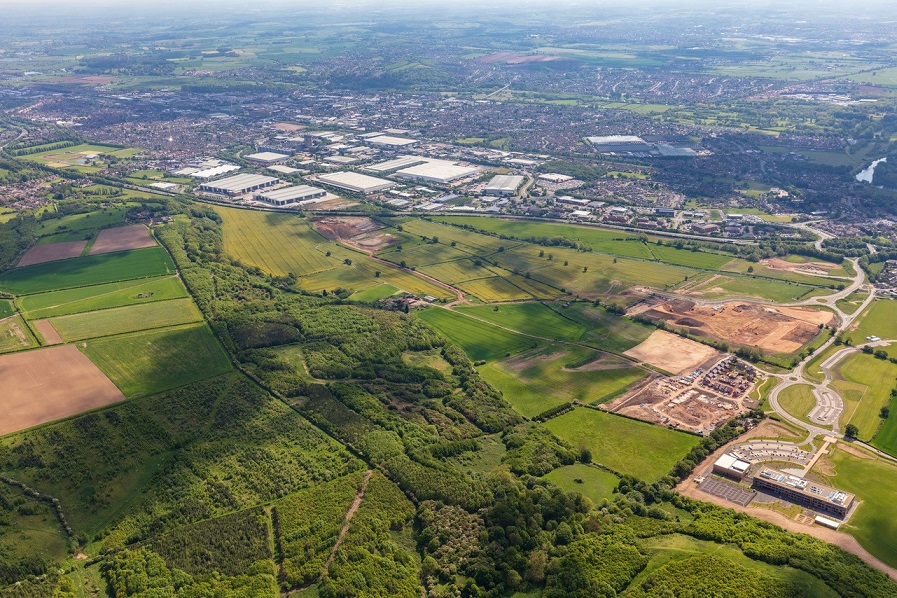 Nurton Developments (Quintus) has secured a £7.5 million deal with Cameron Homes to complete a fourth phase on its 400-acre Branston Locks mixed-use scheme in Burton-on-Trent.

Cameron Homes has already sold over 80% of the first and second phase with the remaining homes to be delivered this year. It plans to provide a further 99 homes, ranging from 2 to 4 bedrooms.

Branston Locks is one of the first large-scale urban extensions to be delivered in the UK and when complete the scheme will offer 2500 homes alongside one million sq ft of commercial space, creating up to 3000 jobs.

An initial £8 million investment in infrastructure spending, supported by a Strategic Infrastructure Award, has already unlocked the development of a new free primary school which hopes to be open towards the end of 2021.

Extensive landscaping is being undertaken to create the green infrastructure which will eventually encompass a 70-acre hillside park and green leisure corridor with open spaces for sports and recreation facilities.

Ian Willicombe, development partner at Nurton Developments, said: “Branston Locks is an ambitious 10-15 year project which has been widely welcomed by the local community and stakeholders, which will provide an exemplar of how urban extensions should be delivered in the UK.

“Strategic land, forms a core strand of Nurton’s business and Branston Locks is a flagship scheme for the company and one which we hope will leave a lasting legacy, with significant investment in placemaking and green infrastructure to create a community people are happy to live, work and play in.”

Willicombe continued: “The residential element has made good progress with Cameron Homes and Taylor Wimpey already signed up and advance negotiations underway with a further two housebuilders to complete a third of the overall homes. We are in discussions with a number of occupiers for significant pre-lets on the commercial space.”

Car parking, social distancing sees shift from cities to out of town offices

The increasing appeal of carparking and the ability to social distance has led to a rise in enquiries for out of town office locations...
Read more
Appointments

The Leicester and Leicestershire Enterprise Partnership Ltd. (LLEP) has been awarded £20 million as part of the government’s ‘Getting Building’ fund. The funding is...
Read more
General News

Mansfield-based Deanestor, the furniture and fit out specialists, has been awarded a £2.3m contract for a major new student accommodation scheme in London. This...
Read more
Finance

Preparations are underway for a £1.2 million project to reconfigure, extend and enhance the National Centre for Craft and Design in Sleaford. Lindum Group started...
Read more
Property

Car parking, social distancing sees shift from cities to out of town offices

The increasing appeal of carparking and the ability to social distance has led to a rise in enquiries for out of town office locations...
Read more
Appointments

The Leicester and Leicestershire Enterprise Partnership Ltd. (LLEP) has been awarded £20 million as part of the government’s ‘Getting Building’ fund. The funding is...
Read more