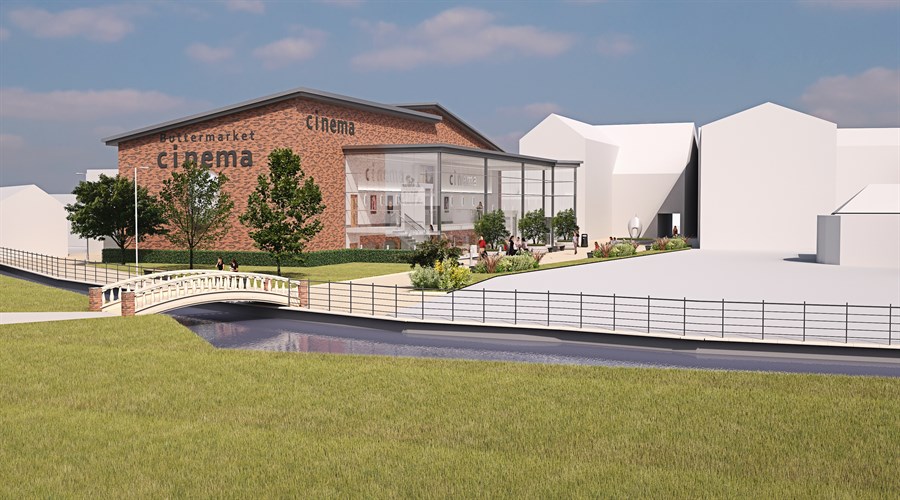 A £4 million three-screen cinema with a restaurant and food court is being moved forward for Sleaford.

North Kesteven District Council has already committed £1.5 million to a cinema project and the authority has now agreed to allocate an additional £2.5 million to the Heart of Sleaford regeneration scheme.

This will bring forward a long-held aspiration for a cinema and also deliver a food court, public open space and a footbridge over the River Slea connecting Money’s Yard to the Market Place.

Following the unanimously supported investment decision by Full Council, work will proceed on the design concepts and in processing a planning application for submission as soon as possible. Ultimately the build contract will be managed by the landowner.

A selection process will take place to find a cinema operator. No opening date has yet been scheduled.

Leader of the Council, Cllr Richard Wright, said the new building would be sited on unoccupied land, behind shops on Bristol Arcade and the complex of buildings alongside the Library, where recent work to enhance the historic frontages has just been completed.

“Local people continue to tell us that they want a modern multi-screen cinema and this proposal will deliver that as a central part of a major economic boost to Sleaford town centre. Providing a cinema is a bold expression by the District Council in support of a modern, multi-use town which meets the needs of a growing and changing town,” said Cllr Wright.

“This is much more than a financial investment; it is a game-changer for Sleaford and a massive investment for the whole District. It is the fulfilment of a long-term aspiration for this Council and the people of the area and a commitment to the future vibrancy of our market town.”

Across three screens, the new cinema will have a seating capacity of 300 which means it will be commercially viable and capable of hosting the latest cinema releases.

As part of the design concept, the cinema construction will incorporate and regenerate the currently vacant and derelict historic vaulted Buttermarket to become a landmark building and contribute towards a visual focal point for central Sleaford.

“Another great plus for this scheme is that the new pedestrian bridge over the River Slea will help to regenerate this hidden part of historic Sleaford. We are also planning to invest in quality hard and soft landscaping to compliment the setting of the new cinema and food court. There will also be a public art feature to give a focal point and draw the eye of visitors from Market Place and Money’s Yard,” said Cllr Wright.

Funding towards an earlier scheme for a two-screen cinema was approved in April 2018, but it has now become clear that three screens are needed for the project to be economically viable.

“With the imminent opening of a five-screen cinema in Grantham and plans to increase the Kinema at Woodhall Spa to three screens, this underlines the need for three screens in Sleaford to enhance the town’s vibrancy and appeal. This development will be great for the evening and night time economy as it will draw lots of people into the town,” said Cllr Wright.

Members from across the District spoke enthusiastically in support of the difference it would make, with Sleaford Member Cllr David Suiter saying: “It will bring people to Sleaford and additional business to the town’s traders” while Cllr Robert Oates said he knew townsfolk would ‘very much look forward to the additional facility’ and the uplift it would bring the town.”

Although Cllr Ian Carrington represents an area almost 20 miles away, he said what was good for Sleaford was good for the entirety of North Kesteven, promoting a vibrant and active economy and cultural scene.

It is estimated that the local spend on cinema tickets could be £750,000 a year which would generate an extra £1.5 million in spending on other goods and services in the town without including food and drink.

Robert Hodgson, a director of landowning company, said: “North Kesteven District Council has been incredible proactive and positive in its vison to bring this scheme forward in order to meet a long-held aspiration of the town and restore some of the town’s historical legacy whilst opening it up for a new generation to enjoy and benefit from. It’s a very exciting proposal.”