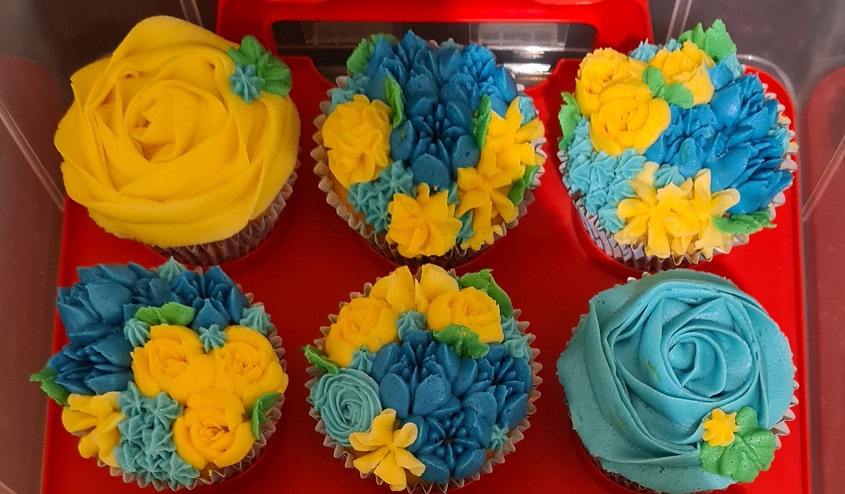 Colleagues at a Derbyshire company put their scientific skills to good use by holding a charity bake sale to support refugees fleeing war-torn Ukraine.

Employees at Lubrizol, a chemicals company with a UK headquarters in Hazelwood near Belper, held a grand cake sale which raised more than £1,000 for the Disasters Emergency Committee Ukraine appeal.

Lubrizol staff showed off their lab-honed skills by creating a range of bakes, many of which they made in the now-famous blue and yellow colours of the Ukraine flag.

Nikky Waring, who works in the company’s Chemical Synthesis and Applied & Strategic Research department, organised the cake sale with colleague, chemist Lindsey Choo, after seeing with horror the scenes of devastation in Ukraine and wanting to do something to help.

She said: “I was actually off work with COVID when war broke out and I found the scenes unfolding on TV really upsetting to watch, because it did all seem so close. I imagined that people’s friends and family members had made arrangements to go for a coffee the following week, or to the cinema.

“The cake sale was just a way of trying to show our support for the people of Ukraine and I’m really pleased so many colleagues really got behind the idea. Our aim was to raise £500 and we totally smashed that with a total of £1,050 in the end.”

One baker to contribute her creations to the sale was Danielle Malik, a project manager in Lubrizol’s industrial department, whose talent in the kitchen saw her regal crown-themed creation recently chosen as one of the top 50 entries in the nationwide Queen’s Platinum Jubilee Pudding Competition.

Danielle created some cute cupcakes adorned with beautiful blue and yellow icing for the cake sale. Other creations included a lemon meringue pie made in yellow and blue, plus apple cakes made to an authentic Ukrainian recipe contributed by Jim Grieveson, chef manager at Wilson Vale Catering which runs the restaurant at Lubrizol.

Nikky said: “This was the first fundraising event I have ever organised and I’m so pleased with how it went. The thought of having to leave your home because your country has been invaded just doesn’t bear thinking about, so I’m pleased to have been able to contribute in a small way to supporting those people affected by this disaster.”

Lubrizol’s Charities and Community Committee contributed further funds which were added to the donation, along with funds raised from the cake sale.