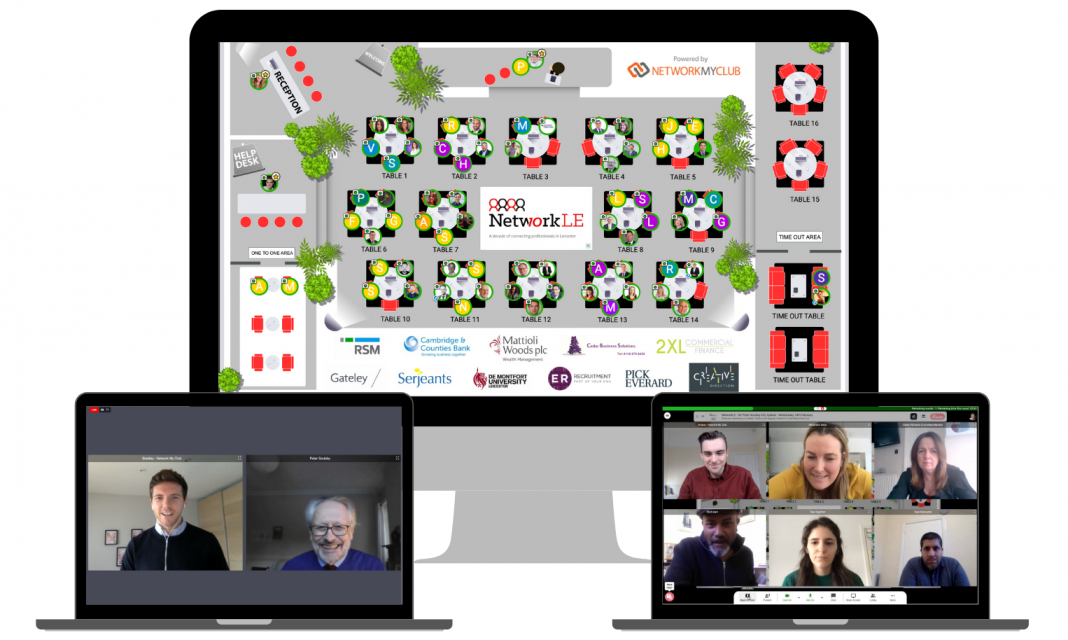 On Wednesday 10 February Network LE, the now 10 year old independent networking group for Leicester’s professional business community, came out of hibernation for its first meeting of the year after the pandemic paused its schedule of professional and social events.

Utilising online event specialists Network My Club, and an online platform with dedicated networking lounges, attendees were able to speak in groups just as one would during an in person event, and move between “tables” of people where delegates only see and talk to those on a table with them.

With 50% of ticket costs donated to FareShare East Midlands, the event saw over £350 raised, equating to approximately 1,400 meals being given to the vulnerable.

More than 70 professionals attended Network LE’s first ever virtual event, which presented a chance to network and hear from Leicester’s mayor, Sir Peter Soulsby, a regular fixture in the group’s social calendar, who shared plans for the city.

On the city’s future and work in progress Sir Peter called attention to a number of projects including Charles Street Buildings’ £50m development programme connecting the city centre to the Waterside, new hotels (Novotel, Adagio), and provision of high quality office space which Sir Peter said “a decade ago would not have been dreamt possible.”

He also pinpointed phases one and two underway at the Friars Mill area, with some £6.5m of investment coming in with 36,000 sq ft of workspace created and a variety of new units around it. In the wider area he shone a light on the prospect of a total office space that is completely under contract of 126,000 sq ft, with the possibility of 1,000 jobs being created, and beyond it the development of significant housing.

The University of Leicester was also given a shout out for its Space Park Leicester development on the former John Ellis school site owned by the council, and next door to this, the council is continuing to develop new workspace at Dock 3. Sir Peter said: “These are all areas that, though just beyond the city centre, will enormously contribute to the profile of the city and its reputation.”

Refocusing on the city centre and its future in a post-Covid world Sir Peter zeroed in on the following developments as key:

Sir Peter also touched on work being done to enhance connectivity and the £70m transforming cities fund, the potential for introducing a workplace parking levy in Leicester, progress being made to bring about transformation to the train station and area around it, as well as the importance of creating opportunities for retailing in the city centre, the bounds of which may shift.

He said: “We may well wish to recognise that we need perhaps smaller units and perhaps more independent shops in the city centre that offer things that can’t be offered by online shopping and that can’t be offered by out of town shopping. We also need to recognise that we need to have attractions that complement retailing and bring visitors from Leicester, from Leicestershire, and from beyond to the city centre.

“Of course one of the great strengths that we have in Leicester is our 2,000 years of history, and preeminent amongst the remnants from that 2,000 years is the largest piece of non military Roman masonry anywhere in the UK. That is Jewry Wall, and as part of the reimagining of the city centre that I believe does have to be possible, the bringing back to life of that museum and developing it into a major attraction that will bring those visitors to the city is even more important in the post-Covid world than it was beforehand.“

In a subsequent Q&A session, Business Link asked which development project held the most importance for Leicester’s economic recovery from the pandemic, and whether any schemes are being reconsidered in light of the pandemic. Sir Peter said: “In terms of the ones that will make the biggest impact immediately, the area around the Waterside.

“It has momentum behind it, the private investment behind it.

“I think we are going to have to rethink not so much the fact that we need offices in the city centre but what sort of offices we need and what sort of spaces we need – touchdown space rather than big corporate headquarters. But I think actually Leicester in this respect and in so many others has the enormous benefit of being a very broadly based economy and we’re not overdependent on particular sectors and not therefore vulnerable to some of the effects, change in general, that Covid in particular might have.

“I do think as well, as we’ve shown over the years, we can be quite flexible in how we respond to changing circumstances, but I’m not going to pretend it’s not going to be a challenging time.”