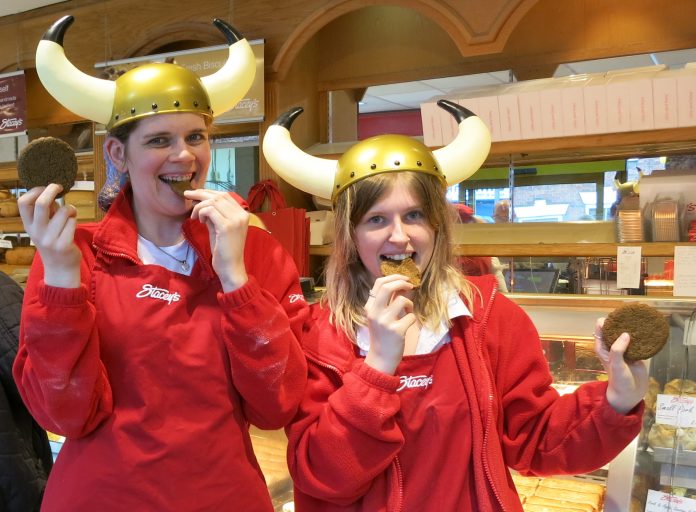 A family run bakery has brought back a famous Viking-inspired Derbyshire cake in the build up to Bonfire Night and is hoping to reach its 10,000th sale.

Stacey’s Bakery, which first reintroduced traditional Thor Cake back in 2016, has seen such success with it over the last three years that it is once again bringing the seasonal treat back into circulation for 2019.

Thor Cake, which is named after the hammer-wielding God of Thunder in Norse mythology, is a spicy autumn cake with a chewy texture and a gingery kick, made from oatmeal, butter and treacle, with coriander and Demerara sugar.

Traditionally eaten on Bonfire Night, its flavours are broadly similar to those of Yorkshire Parkin, but as a flatter biscuit-style of treat, it is tied to the East Midlands by virtue of the fact that local communities would traditionally come together, bringing an ingredient each and baking the cake as a joint effort.

Despite Derby’s cultural heritage as one of the five Boroughs of Danelaw, under direct Viking rule from the 9th to the 11th centuries, the cake had become virtually obsolete in the region until Stacey’s Bakery resurrected it. But David Stacey, MD and Great Grandson of the bakery’s founder, believes there’s every reason to bring Thor Cake back as a mainstream seasonal staple in the East Midlands once again.

He said: “We’ve really begun to look forward to this every year now. The Thor Cake is great fun, it’s a traditional part of our baking culture here in the East Midlands and it’s a cake that has always been the focal point for bringing our communities together at this time of year.

“More to the point, our customers really love it. It’s only ever available for six weeks each autumn but we’ve sold 7,500 Thor Cakes over the last three years and I have no doubt that, as Bonfire Night draws nearer, we’ll push well beyond the 10,000 mark.”

Founded in the early 1900s, Stacey’s has continued to grow over the years, with shops on South Street and Bath Street in Ilkeston, plus additional outlets in Eastwood and Heanor. It continues to bake and decorate everything by hand to recipes that have been in the family for generations. As one of its most famous ‘special edition’ products, Stacey’s Thor Cakes are on the shelves now at £1.20 for a pack of four and will be available to buy until the end of November.