Charlotte Valeur, Chair of the IoD, headlined the event as keynote speaker, joined by some of the region’s top leaders, who shared inspirational stories with delegates at the lunchtime event.

Opening the convention, Ron Lynch, IoD East Midlands Regional Director, said a few words. In his speech Ron outlined the importance of running events that will have an impact on society and improve diversity, which indeed, as Ron said has many benefits. Ron noted: “We know that diversity on the board brings many benefits.

“There is obviously a moral case for a diverse workforce and there are a lot of other business benefits. There is a financial case, because you end up with far better decision making, you consider more perspectives and reach the right answer in more cases. You also benefit from improved retention and morale amongst other things.”

Louise Third MBE of Integra Communications Ltd, the host of the event for the second year – a PR and communications consultant specialising in business growth – then took over the mic to introduce Charlotte Valeur, Chair of the IoD.

On leadership Charlotte presented key points including the importance of balance. She said: “Balance is what we’re looking for because balance is what makes the world go round.”

She continued: “We want to be in a place where we have respect for everybody and space for everybody […] that is what I work towards, equality for all so we can all be who we are and bring to the table who we are no matter what it is.

“Balance in everything has to come from the leaders. We are the ones who need to show people how to do that. Unfortunately we have some political leaders that are not giving us great role models to follow. If you hold yourself out as a leader it comes with a responsibility to be a proper role model for the society you’re in.”

She went on to discuss how in the top levels it is important to have diversity – not just gender diversity – but all diversities as represented by our population.

In her engaging speech Charlotte also made an interesting point on how leadership is “not about men or women” but rather togetherness and collaborative working. She emphasised that whether a leader or leadership style is “male” or “female” you get the value of one, one is not better than the other, and should not be excluded. Charlotte said: “Once we move to a blended male-female leadership style we get one plus one is three.”

Quite importantly, she noted three levels of leadership: the first level, she said, is where we lead ourselves; the second is where we lead ourselves with a team; and the third, perhaps optimum, level is when we are able to create an environment to make others successful. Charlotte said: “We need to aspire to be that person that creates an environment for other people to be successful.”

Charlotte also highlighted the need to have and know your values as a leader. She said: “I see the world going over from typical capitalism to […] valuism, a new concept being discussed in various strategic circles. Values are a very big thing for me. I think if the world was more focused on values and the leaders more focused on values and put that forward we would get the world to be a better place. Value is the measure of success in human terms.”

She suggested that leaders consider and commit to value words: “Make a social contract with yourself where you say ‘my values are…’. If you have a LinkedIn profile put in your values in the top line, so that is what people see when they see your name and your face. Then you make a contract with the world.

“Leadership needs to be based on values that you find in your heart. Once we do that it will trickle down in our society.” As for Charlotte, she noted that her value words are collaboration, honesty and trust.

After a Q and A with Charlotte and a break for lunch, Louise introduced the next section of the event, the panel. 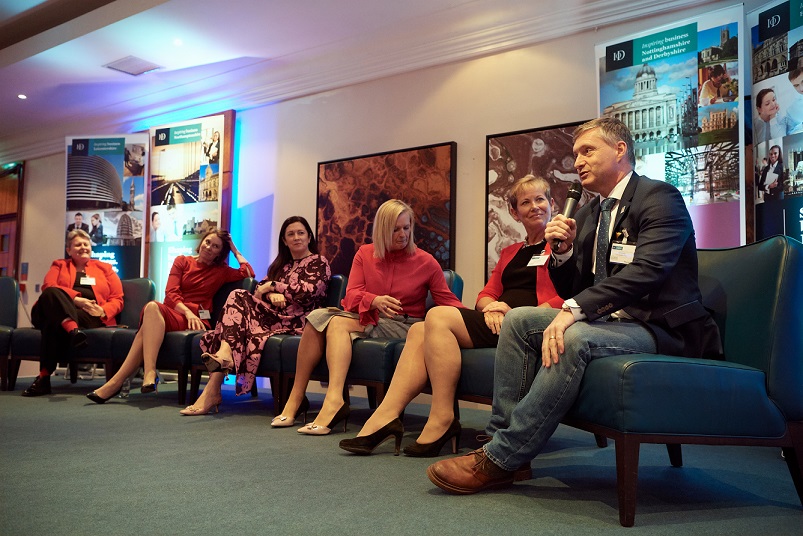 The first to speak was Caroline Killeavy, CEO of YMCA Lincolnshire. Caroline highlighted that she is aspiring to set a collaborative, person-centred example for her team, in a sector where she has seen some rather cutthroat leaders. Caroline focused her time talking about the importance of followers, highlighting a saying used by US congressman John Boehner, who said “a leader without followers is simply a man taking a walk.”

Caroline said: “Those leaders that actually care about who follows them and why, and those people that aren’t following them and why are very wise.

“Leadership for me […] is that actually I need all of my team with me. We need to be shoulder to shoulder, and you have a responsibility to make sure their talents and skills are given the opportunity to shine. I have the opportunity to lead those people down a particular path.

“I was asked how I model leadership in the charity sector […] I decided that I don’t walk alone.”

Lisa Wainwright, Technical Director for International Volleyball (FIVB) and a member of the International Basketball Federation (FIBA) Governance Commission, spoke next. Reflecting on values, Lisa talked about the importance of integrity. She said: “Being an authentic leader is about being honest about who you are.

Karen Smart, Managing Director at East Midlands Airport followed, talking about modelling leadership in a corporate environment. Karen said that the leader’s most important job is being a role model. She noted: “Nobody’s perfect – it just being about being the real you and letting people see the real you.”

One of the key points that Karen made was the importance of visible leadership. She said: “Being visible is hard in a big corporate environment.

“I put time in my diary each week to do that. I get out there and talk to the people.

“The only way to really truly show where you want to go and give people direction is by being out there and talking and taking the feedback first hand.”

Karen concluded her time with the audience by saying that as a leader you must be yourself, be visible, listen to what people say, not be afraid to challenge people and have difficult conversations, but equality give lots of praise.

Bill Skelly, Chief Constable of Lincolnshire Police spoke next. Exploring two areas of being a leader: the already touched upon importance of authenticity and compassion.

In regard to authenticity he said that as a leader you must “be true to yourself […] know thyself, […] understand who you are and who you want to be, the person you are actually living, and you need to be able to open that out to others so they can see it.”

Bill also highlighted that his value words, as initially brought into the convention’s conversation by Charlotte, are truth, justice, duty.

In regard to compassion Bill noted that empathy and action are compassion.

He went on to say: “The effect you have as a leader on people’s lives is massive and if you demonstrate that compassion then they will follow you.” Closing his speaking time, Bill highlighted that authenticity and compassion are not just words but verbs, they are activities to be done, so one must actually go and do them.

The penultimate panel member introduced was Susan Hallam MBE, of Hallam Internet, who discussed leadership in a small business environment. She talked about how leadership evolves in oneself and how leadership is something one can learn as one goes along.

Complimenting Charlotte’s speech, Susan brought up the importance of North Star principles, knowing your values and staying true to them in the in turbulent times of change. Susan also touched upon innovation and being open to ideas. She said that the big thing about leadership she learned in the realm of innovation was to be able to ask for help and get advice you need from other organisations. She noted that one must continue to develop leadership skills and not be afraid to say that we need to develop these skills.

Melanie Currie, Deputy Dean of Nottingham Business School was the final panellist introduced. A key takeaway from Melanie’s talk came when she said: “The sense of saying ‘no’ can be important as a leader, but it’s also equally important to say yes and agree to do things even if you don’t think they are going to work.”

Melanie also noted the importance of reading how people are feeling and tapping into those feelings, as well as the importance of being authentic and opening oneself up, being available for people and challenging people.

On being a leader Melanie concluded: “I am on a journey to becoming something. I think it’s really important that we don’t think anything is a marker of a space or place, we are all on that journey, we all have a really important story and in sharing those stories each of us is become a little but more who we want to be and who we want in terms of that inspiration for others.” 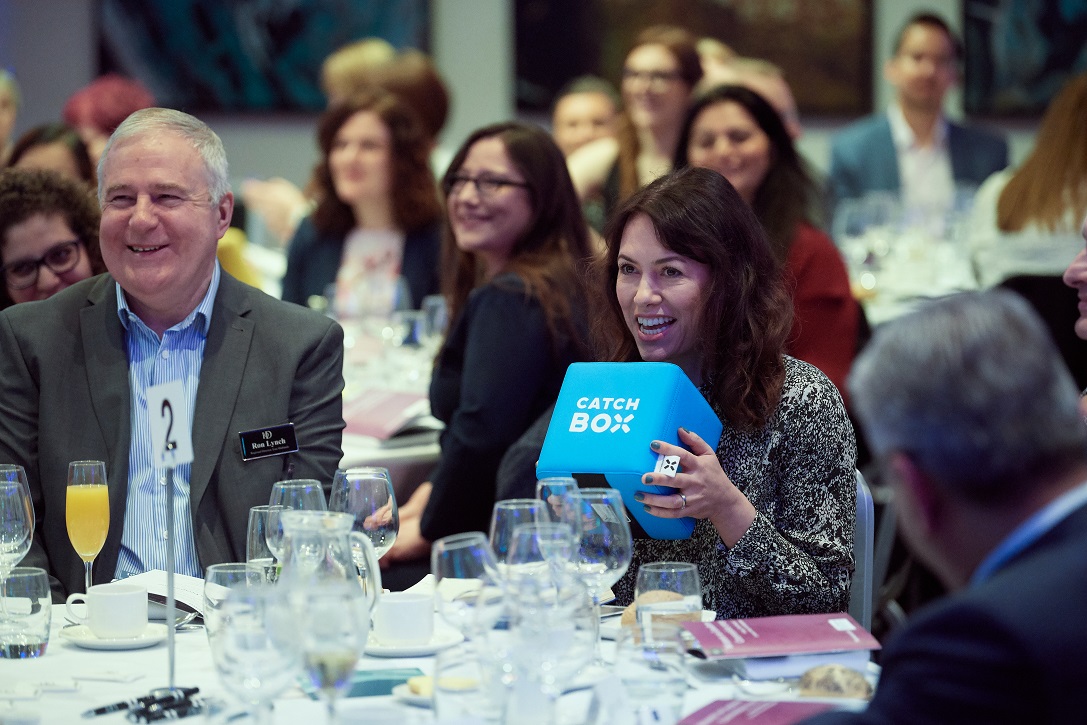 A Q and A with the panel followed covering topics from loneliness as a leader, to balancing family and success, and the question of whether men find authenticity more difficult than women.

Louise then rounded off the event with a summary of takeaways from what the speakers had said during the convention including:

-The idea that empathy plus action is compassion

-The importance of visible leadership, authenticity, and giving praise

The afternoon finished with words from Garry Smith, IoD Regional Chairman, who pulled out key themes from the day including authenticity and the important of followers.

Tess Egginton - 21st February 2020
It’s time for businesses from across the region to put together their teams and enter this year’s Nottingham Riverside Festival Dragon Boat Challenge, in...