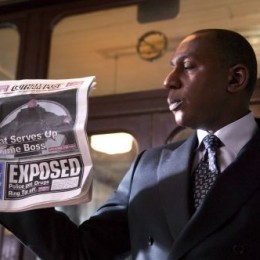 Actor, theatre producer and writer Colin McFarlane was guest speaker at the Lincolnshire IoD luncheon on Friday, which attracted 160 guests. Colin has appeared in many film, theatre and television productions including Hollywood Blockbusters such as The Dark Knight and Batman Begins.The luncheon also provided an ideal opportunity for the presentation of an Institute of Directors’ Life Fellowship award on Friday to Lincolnshire businessman John Clugston.John Clugston was presented with his award, marking 51 years Membership of the IoD,  by Annette Wood, Chair of the IoD in Lincolnshire, at the annual Lunch held in the Bentley Hotel.

Annette Wood said 2015 had been a particularly notable year for Lincolnshire directors. It saw Sean Ramsden, Chief Executive of Ramsden International being named as the IoD’s International Director of the Year and earlier in 2015 there were four category winners from Lincolnshire in the IoD East Midlands Director of the Year awards. She said :” We are very proud of what they have achieved. We need to continue to ensure our businesses receive the accolades they deserve.”

Some £1,250 was also raised in a raffle in aid of the Pelican Trust, a Lincoln social enterprise.