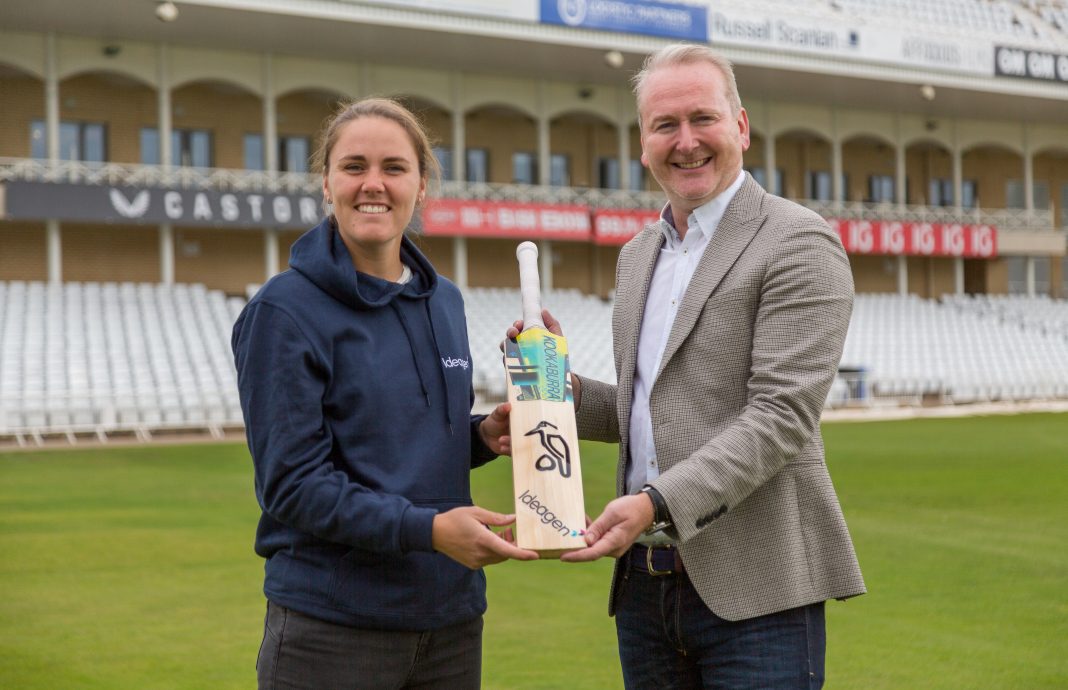 Speaking about the new relationship, Ideagen CEO, Ben Dorks, said: “Nat perfectly personifies Ideagen as a business – she’s an innovator, she’s widely regarded as one of the best in the world and is a superb all-rounder who has achieved things no-one has ever done before.

“The clarity of strategic thinking and tremendous quality of execution displayed by Nat absolutely aligns with Ideagen as a business. We’re immensely proud that our name will be on her bat this season and can’t wait to see her in action for Trent Rockets and England.”

The Ideagen branded bat has already had a successful first outing with Nat scoring her maiden test century in against South Africa in Taunton last week.

Speaking about the deal Nat said: “I’m really excited for the year ahead and delighted to have Ideagen on board. They’re a global company but have really strong community focus and are active supporters of youth and women’s sport.”

Currently at the height of her game, Nat is the top all-rounder in the International Cricket Council’s One Day International (ODI) rankings and second in its batting rankings, closely behind Australia’s Alyssa Healy.

Similarly, Nat is classed as second top all-rounder and the highest placed England player in the batting rankings for Twenty20 (T20). Her excellent maiden test-match century also secured her a nomination for the ICC Women’s Player of the Month for June 2022.

Nat is also one of the faces of BBC Sport’s “We Know Our Place” campaign, which champions female talent in sport, showcasing the phenomenal progress made in recent years to challenge outdated perceptions.

She was the first cricketer for England to take a hat-trick in a Women’s T20 International match and has a shot “The Natmeg” – named after her when she hit a cricket ball through her legs during a game.

Ben continued: “Ideagen provides software solutions that protect organisations, where safety, quality and compliance are important. Like Nat, we are reliable, consistent and can be trusted to deliver. We truly share Nat’s innate drive to keep improving and evolving, achieving new levels of success while having a positive impact on the world around us.”

Beyond its software solutions, Ideagen has a commitment to community, having launched its Think Big initiative in November last year. Working with young people in education, the programme is designed to boost career prospects in technology and to help bridge the digital skills gap. Ideagen is also a sponsor of Nottingham Forest’s academy and Forest Women’s development squad.

Ben added: “We have plans to roll out Think Big globally and it would be fantastic to get a role model like Nat involved – cricket calendar allowing!”