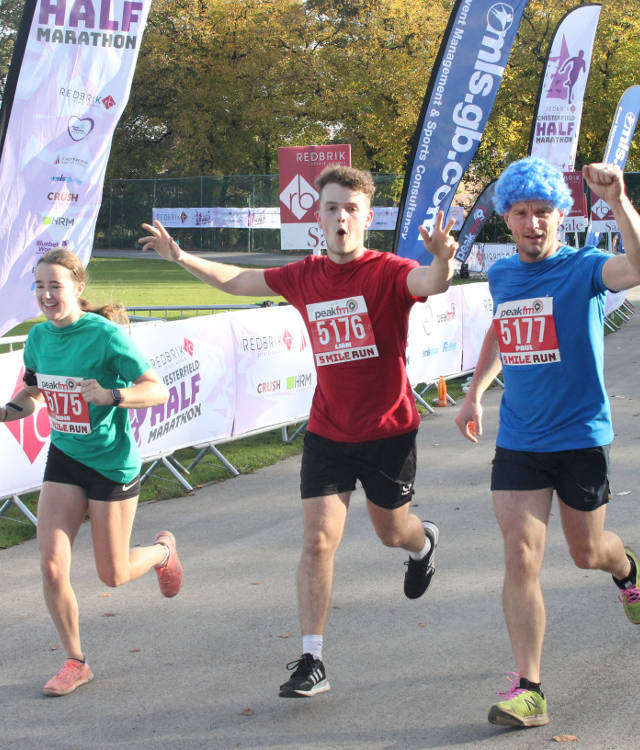 The 2019 Redbrik Chesterfield Half Marathon has been hailed a success by organisers, event partners and participants after enjoying a record-breaking third outing.

More than 1,500 people registered for the event’s three elements – the 13.1-mile Half Marathon, Peak FM Five Mile Run and Blachford UK Fun Run – with new course records also set by both the female and male Redbrik Half winners.

Richard Start, from Wingerworth in Chesterfield and of North Derbyshire Running Club, was the first to cross the Redbrik Half finish line with a record time of 1:11:52, with Leeds’ Susan Lewis, of Roundhay Runners, the first female to finish in a time of 1:24:29 – also a new record for the current Redbrik Half course.

The Redbrik Half’s oldest participant was 79-year-old Dave Onion, from Nottingham, with Daniel Lowe, from Ashgate in Chesterfield, the youngest at 17.

Logan Fairey was the winner of the 1KM Blachford Fun Run, which took place within the boundaries of Queen’s Park in tandem with the main event.

Around 15 organisations also took part in the first Pronto Paints Wellbeing Challenge, a team entry into the Redbrik Chesterfield Half Marathon’s events.

The event was also hailed a huge success online – with people taking to social media to heap praise on the Redbrik Half.

Shannon Robyn commented: “Finally got to complete this today with my partner David. An amazingly well-supported race with plenty of water stations. All the marshals were fab. Great event!”

“It is truly amazing to see how many people turned out to support the event, both in Queen’s Park at the start/finish line and out on route.”

“We are extremely grateful to everyone who contributed to making the event a success once more – including event partners and sponsors, and of course all those who took part.”

“A special mention must go to all the volunteers who helped out on race day – who gave up their Sunday morning to help keep everything running smoothly, to assist runners and to help the general public. Without them, this event simply would not be possible, so a big thank you to everyone who helped out.”

“I also want to thank anyone who was affected by the road disruptions across Chesterfield for their understanding throughout the day.”

“Most importantly, however, the money raised by this event will go a long way to helping good causes like Ashgate Hospicecare and Bluebell Wood Children’s Hospice, which do so much fantastic work in the local community.”

Mark Ross, Managing Director of headline sponsor Redbrik and who took part in the Peak FM Five Mile Run, said: “The 2019 Redbrik Chesterfield Half was without doubt the best Redbrik Half yet.”

“We are very proud to have been involved in the event’s success again this year – supporting the local community and giving back to the people who have helped make our business such a success since our establishment in 2013 is part of our ethos.”

“It was fantastic to see so many people turn out for great causes, which at the end of the day is what this event is all about.”

“We love this town and we want to see it thrive. Events such as the Redbrik Half Marathon help to do that, with huge numbers of people coming to Chesterfield from all parts of the country to support, contribute or take part. We can’t wait until 2020 already!”

Support Rainbows Hospice with your business at Nottingham’s 2020 Dragon Boat...

Tess Egginton - 13th February 2020
The Nottingham Riverside Festival Dragon Boat Challenge will return to the Trent on Sunday 2nd August and businesses can now enter their teams into the...