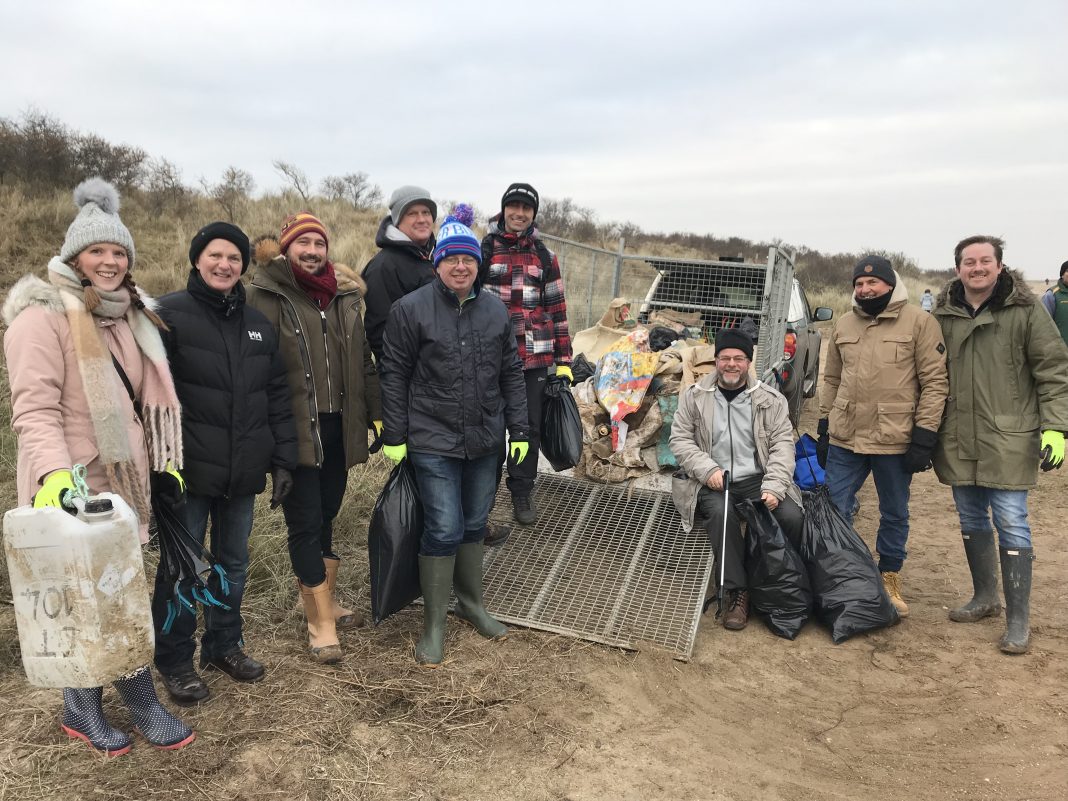 Plastic – which has been harming seals and polluting the Lincolnshire coastline – has been collected by one Nottingham-based packaging manufacturer, who is keen to display it at an industry exhibition.

Staff at Nottingham’s The Wilkins Group sent a team of volunteers to pick litter at Gibraltar Point and were joined by representatives from Lincolnshire Wildlife Trusts, as part of their corporate social responsibility scheme.

At the event, employees saw the impact that the waste had on the landscape and wildlife first-hand, which for many, unveiled the shocking truth about the devastating consequences of plastics.

Over 2,000 seal pups have been born on the Lincolnshire coast this winter. The rubbish that the team collected could all have a harmful impact on the seal population if they encountered these items.

Managing staff at The Wilkins Group were therefore very keen to raise awareness of this issue.

Sales and Marketing Director, Justin Wilkins, said of the clean-up: “By taking part in the Lincolnshire Wildlife Trusts beach clean-up, we are doing our bit. If everybody did their bit, then it would make such a huge difference. If every human did their part, then we wouldn’t have the problem that we do now.

“Our team were so enthusiastic about taking part when it was discussed at a management meeting, and it really was valuable to see the issue first-hand. Many of the items we found were plastic, including microwaveable trays. One of the most surprising items we found was a builder’s sack full of items.

“It is shocking, the full scale of the debris washed up on the shoreline.”

Every year, over 1 million marine animals are killed due to plastic debris in the ocean, according to sea-life charity, Conserve Turtles.

Aside from litter picking, the packaging firm which has its head office based in Colwick, Nottingham, has also many forms of bio-degradeable cardboard containers, able to withstand microwaves and ovens – something attracting much attention from many of the UK’s leading food producers and supermarkets.

Spokesperson for Lincolnshire Wildlife Trusts, Vicky Bush said: “The rubbish we find on our beaches and in the oceans is having a huge impact not only on the wildlife living there but also on ourselves.

“The amount of people coming out on a cold winter’s day to help clean the beach was amazing and we are overwhelmed by the support at Gibraltar Point but it’s not just about removing the rubbish on our beaches but cutting down the amount getting into our environment.

“We want our coastlines and waters to be a safe and enjoyable place for wildlife and people to visit and how we dispose of our rubbish at home and when visiting the coast plays a big part in that. Reducing, reusing and recycling our rubbish and plastics and making sure they are properly disposed of will help to reduce the amounts we are finding on our beach cleans and have a positive effect for our wildlife.”

All the litter collected from the beach clean-up is set to be displayed at the annual Packaging Innovations show held at the NEC in Birmingham between 27-28t hFebruary.

At the exhibition, the biggest packaging companies in the UK gather to showcase their new ideas. The Wilkins Group hopes that this will bring attention to the waste problem.