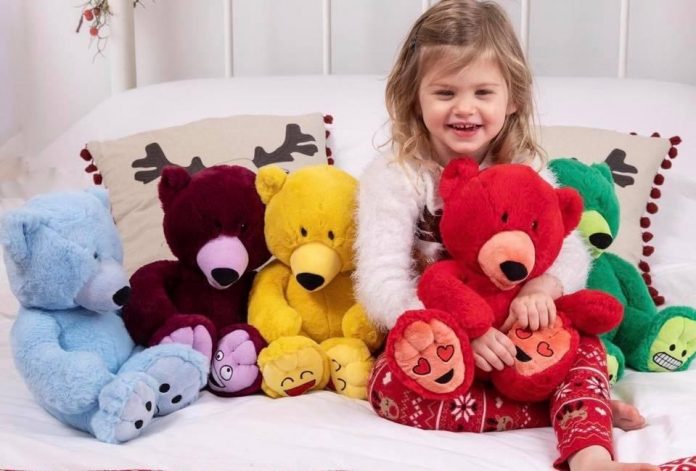 Mood Bears, launched by Loughborough-based Joanna Proud, are colourful teddies which are helping young people deal with their feelings and emotions, and are increasing in popularity during Children’s Mental Health Week, this week (3-9 February).

It is hoped that in time they can encourage us all to talk, listen and understand our feelings, thoughts and moods.

The team behind Mood Bears recently took the cuddly characters into Leicester Royal Infirmary to meet some of the children undergoing care – and received an overwhelmingly positive response.

Joanna Proud – who designed the teddies and co-owns Mood Bears with husband Nathan – aims to get the bears into every hospital in England. More than 700 have been sold in just two months.

Mood Bears’ success comes as Anne Longfield, the Children’s Commissioner for England, warned that a ‘chasm’ remains between what mental health services are available for children and what they need.

An estimated 12.8% of children in England have mental health problems – and many more fall just below the threshold for clinical diagnosis.

The prevalence of five to 15-year-olds experiencing emotional disorders, including anxiety and depression, has increased by 48% – from 3.9% in 2004 to 5.8% in 2017, according to NHS Digital.

But Ms Longfield said: “We are still a decade away from a decent mental health service for all children.”

Mood Bears welcome companies to sponsor the bears. The firm’s name is printed on a certificate which is presented with each teddy.

Tess Egginton - 20th February 2020
Creationz Marketing, the Beeston-based marketing and social media consultancy, has entered into a strategic partnership with Nottingham Trent University as part of its mission...