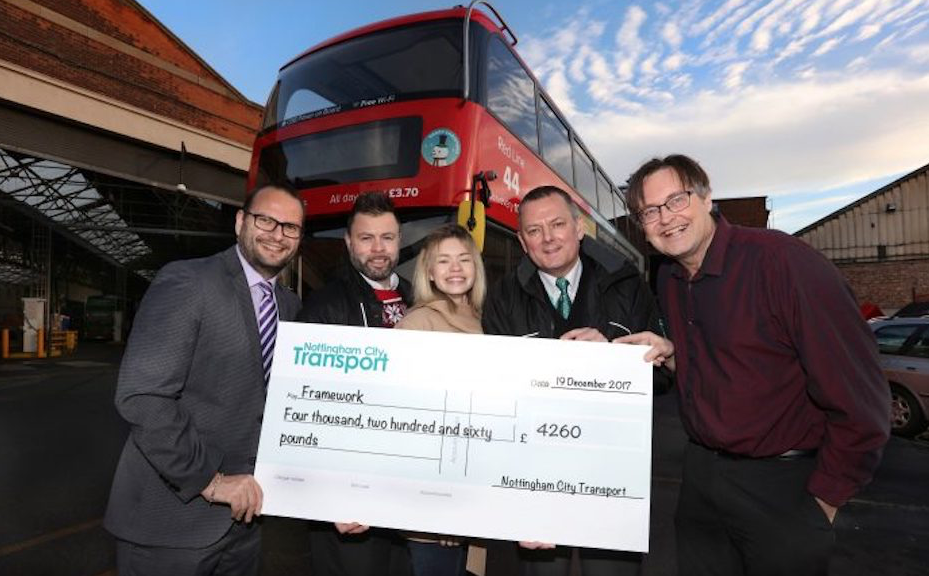 Nearly 140 employees from Nottingham City Transport (NCT) began their festive-giving, by donating each of their Christmas bonuses to a new initiative tackling homelessness in the city.

NCT employees were due to receive bonus’s on top of their wage packets for the festive season but chose instead to club together and give the lump sum to charity.

The city bus network company has matched their staff’s amount, bringing the total to £4,260 – which will now be donated to Framework via the new Help Out Nottingham scheme.

Launched in December 2017, Help Out Nottingham is a new online platform aiming to give members of the public an effective way of helping those begging and sleeping rough in Nottingham city centre.

The scheme hopes to raise awareness of the many services that are available in Nottingham to support people in need.

It has been launched by a number of partnered organisations, including the Nottingham Business Improvement District (BID), Nottingham City Council and Nottinghamshire Police.

Heading the NCT Christmas donation is employee Les Roome, who was awarded NCT Driver of the Year 2013 and was winner of the Top National Bus Driver Award at the UK Bus Awards in 2014.

He said: “After chatting with some of my fellow drivers, we thought it would be a much better idea that rather than keep our individual smaller amounts, we would put it together and donate to a good cause. You see a lot of things when you drive buses at all times of the day and we immediately thought it would be a great idea to help homeless people. Christmas is the season of giving and nobody should be sleeping rough at this time of year, so Framework and this initiative seemed like the perfect cause.”

Marketing manager at NCT, Anthony Carver-Smith, added: “We are proud that our team has decided to do such a generous act ahead of Christmas. Because of this, NCT decided to match their sum to bring the total amount up even further.

“Homelessness is a big and important issue in Nottingham at the moment, and we would like to do our bit in helping tackle rough sleeping – especially over the festive period.”

Jess Barnett, a director from the Nottingham BID, said: “We are pleased to be a part of the Help Out Nottingham project and we are overwhelmed at the generosity of the staff at NCT – what a fantastic gesture to kick start the Help out Nottingham campaign.”

Homelessness association Framework will be putting the money into their Street Outreach team, who help rough sleepers every day around Nottingham. This includes helping them find safe and secure accommodation, finding appropriate treatment for underlying issues, giving them secure access to medical aid and offering a life-line to those in most need.

Framework chief executive Andrew Redfern said: “This is a wonderful gesture by the employees at NCT and we are truly grateful to them for their collective generosity. Street homelessness is once again a visible problem in our city – especially to those people whose work takes them out and about in the early hours of the morning. This money will be used to support the work of our street outreach team and will directly contribute to our efforts to get people off the streets – not just for a single night but for the long term all year around.”