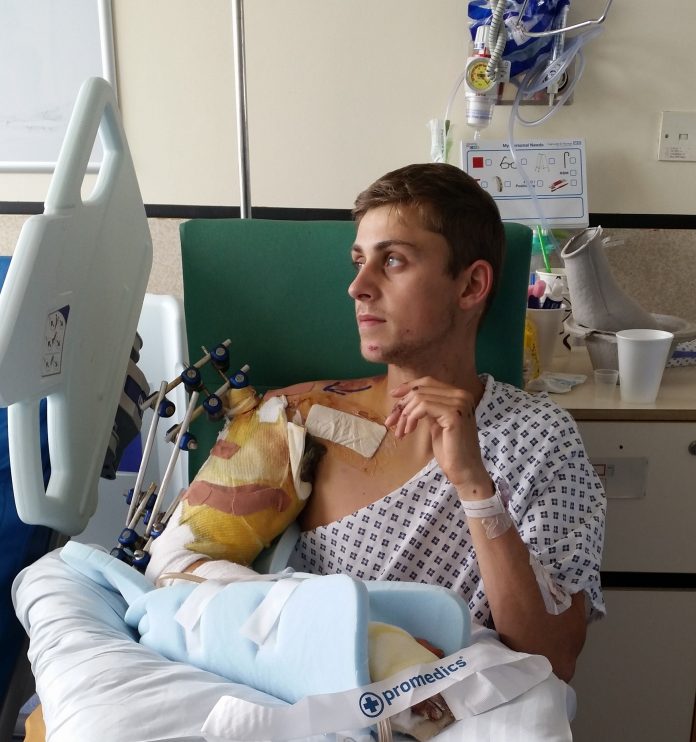 A director of one of Europe’s motorhome marketplaces is looking for help to raise funds for a young motorhoming enthusiast who requires life-changing surgery following a road accident.

Richard Wood, Managing Director of Mansfield-based Motohome Depot, is trying to raise awareness of the plight of Vinnie-Jay Marshall, a family friend who needs to raise £45,000 to save his arm from being amputated.

The 18-year-old was in a moped accident in 2016 in which he collided into a central reservation. He was rushed to hospital with life-threatening injuries, was placed in an induced coma for three weeks and underwent 15 operations to repair an open fracture of his right arm, along with severe nerve and vein damage.

He was all set to have a final operation at the Royal National Orthopaedic Hospital before Christmas to enable him to move his right arm again, but the NHS cut the funding.

As Vinnie has no movement in his arm he needs a free muscle transplant operation. The complicated procedure will see muscle fibres taken from his thigh and abdomen to replace the dead fibres that had to be taken out of his lower arm. This will enable Vinnie to move his arm and lead a normal life again.

The surgeon, Mr Anthony Macquillian, is a specialist in peripheral nerve injuries and is the only surgeon in the UK able to perform the life-changing operation. The total cost to give Vinnie his life back is £45,000, which includes the operation, recovery time spent in the intensive care unit, as well as his physiotherapy and aftercare.

Richard said: “This is a really sad story that is close to all our hearts here at Motorhome Depot, because Vinnie and his family are personal friends. Motorhoming is a big part of their lives, so it would be great if [we] could come together to help give Vinnie his life back by donating towards his operation fund.”

Vinnie’s Mum, Anita Marshall, added: “Vinnie has done really well to get himself to where he is now and has been recovering really well, so we couldn’t really believe it when we found out they weren’t going to carry his operation out. He has had 15 operations already to get to this stage and then to have the last one cancelled to get his arm functioning is beyond belief.”

More than £15,000 has already been raised for Vinnie’s fund. If you would like to donate, you can do so at www.justgiving.com/crowdfunding/anita-marshall.