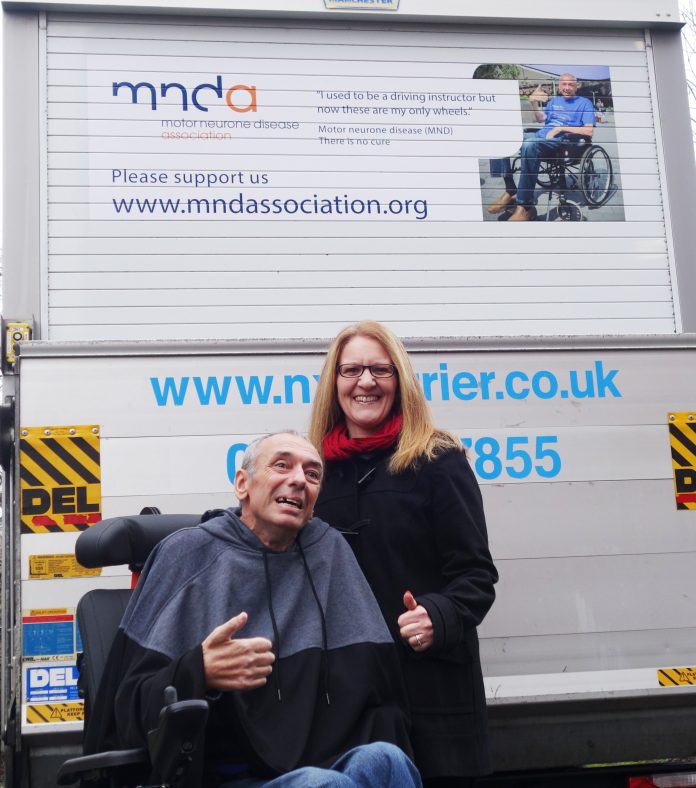 A Northamptonshire logistics, warehousing and courier firm is continuing to help to raise awareness of Motor Neurone Disease (MND) by putting photographs and comments of sufferers of the condition on the back of its some of its vehicles, to be seen by other road users.

In the run-up to Global MND Awareness Day (Thursday 21st June) The NX Group, which has its head office in Crick, has also announced it is aiming to raise £5,000 for the Motor Neurone Disease Association this year.

Some of the firm’s vans show an image and comments from former Driving Instructor David Solomon, from Northampton, who passed away shortly after his photo was added to the vehicles. His widow Paula has supported the continued use of the David’s photo and comments.

The company has a personal connection to the debilitating illness, as its Chairman, Michael Powell explains; “We have always encouraged awareness of MND, as my mother died from the condition more than 30 years ago. My sons Neil and Russell now run the company, and we want to do what we can to help those who suffer from MND, in her memory.

“The MND Association is a charity that does a lot of good work for people with this awful disease and their families, and which means a lot to us personally. We are very happy to raise awareness and money for the charity and will work hard to hit our target donation for them this year.”

The NX Group has featured pictures of various MND sufferers on some of its vehicles for more than 15 years, and has raised money for the MND Association in past years, but wanted to make an extra special effort this year and donate more than ever before.

Sally Light, Chief Executive of the MND Association, said, “Today in the UK, six people will hear the news that they have MND. In that instant, their world – and the world of their loved ones – is shattered.

“Without support like this from The NX Group, the MND Association simply would not be able to fund research to find a cure, campaign and raise awareness of MND and provide its vital support services. Together, we are making a real difference for people affected by this devastating disease.”

MND is a fatal, rapidly progressing disease with no cure which affects the brain and spinal cord. It leaves people locked in a failing body, unable to move, talk and eventually breathe. Motor Neurone Disease kills a third of people within a year, and more than half within two years of diagnosis. Professor Stephen Hawking, the most high profile person with MND in the world, died from the condition earlier this year, decades after diagnosis.

3rd April 2020
Derby businesses rallied together last month, helping each other overcome adversity when their commercial premises were decimated in the flooding. Ground floor offices at River...