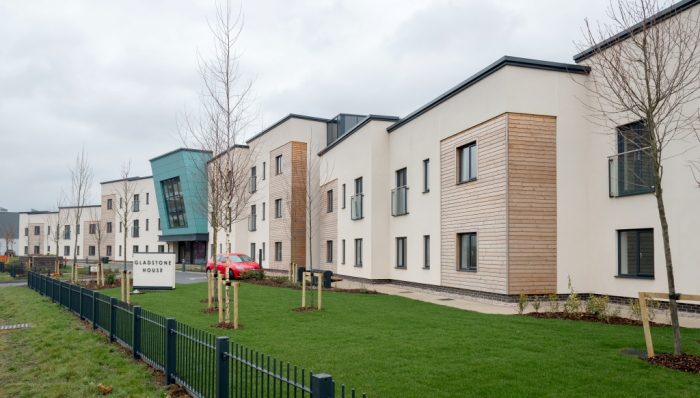 The building was built by Henry Boot Construction Limited on behalf of Newark and Sherwood Homes, Newark and Sherwood District Council and Nottinghamshire County Council. The sixty flagship Extra Care apartments give older people, particularly those with low level dementia, the opportunity to live independently and safely.

Rebecca Rance, chief executive at Newark and Sherwood Homes, commented: “We were delighted as project managers to have commissioned and worked in partnership with Henry Boot for the delivery of this multi million pound flagship building.

“On behalf of Newark and Sherwood District Council, we are now managing an exceptional extra care scheme where people are able to continue to live independently in a building which has a real sense of warmth, community and homeliness.”

Councillor Bruce Laughton, chairman of Newark and Sherwood District Council’s homes and communities committee, said: “Gladstone House is a pioneering project that has demonstrated the value of partnership working.

“The district has an ageing population which is influencing our housing provision and social care and health partners were involved in the design of the buildings from the outset. The development has also been used as a catalyst to co-locate social and health care with housing in order to develop future service delivery.

“It is future proofed with advanced assisted technology to reduce care costs and prolong independence, such as state-of-the-art toilets and the scheme design deals with resident isolation with extensive community facilities such as a ‘hobbies shed’. There are also eight assessment apartments to facilitate early discharge from hospital, thus supporting the health agenda.”

As winner in the regional category, Gladstone House will now go on to the LABC Building Excellence Grand Finals at the Park Plaza Westminster Bridge in London on 9th November.