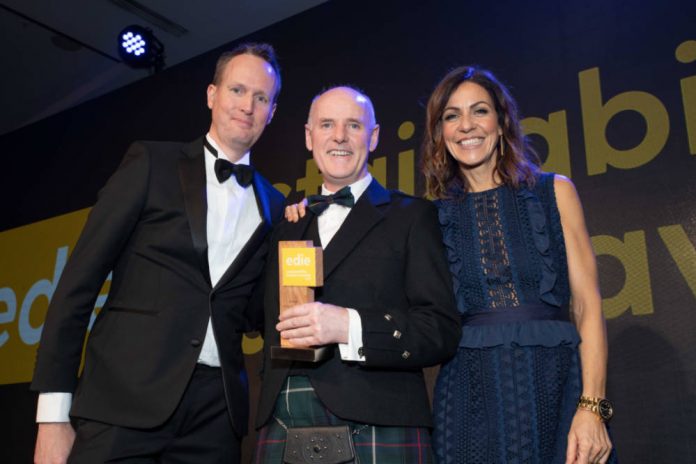 The Group Sustainability Manager at Leicester-based brick maker Ibstock has won a top sustainability award in recognition of his commitment to energy management.

Michael McGowan was named ‘Energy Manager of the Year’ at the edie Sustainability Leaders Awards 2020.

He has been a driving force behind Ibstock’s energy management strategy, playing a key role in the development and launch of its ‘Sustainability Roadmap 2025’.

As a result of the energy saving measures he has introduced, Ibstock is on target to achieve a 15% reduction in CO2 per tonne of production by 2025, and on average it now takes almost 65% less energy to make brick than was the case in 1970.

The awards, co-ordinated by environmental publisher edie.net, are the UK’s largest and most prestigious sustainability awards, recognising excellence across the spectrum of green business.

According to the judges: “Michael stood out because of his vision for the need and, more importantly, his ability to communicate and engage with the issues and people concerned.

“He initiated a broad scope of actions across the company on energy management, which the Judges believe make him an ideal winner for the category.”

Mr McGowan said: “I’m incredibly humbled to be named Energy Manager of the Year. But this award is recognition of the hard work of the wider team in improving energy performance.

“The progress we have made shows we can bring about real change to reduce our impact on the environment and our focus remains on making further improvements over the next five years.”

Ibstock Chief Executive Officer Joe Hudson added: “Michael has been a real catalyst for Ibstock’s innovative approach to improving energy performance. By engaging with our wider teams on continuous improvement, we are building a strong culture of sustainability. As a result, Ibstock is looking towards a promising future where our impact on the environment is not only minimised but positive.”

Ibstock was also a finalist in the ‘Energy Efficiency Project of the Year’ – a category which it won in 2019.

Tess Egginton - 20th February 2020
Creationz Marketing, the Beeston-based marketing and social media consultancy, has entered into a strategic partnership with Nottingham Trent University as part of its mission...