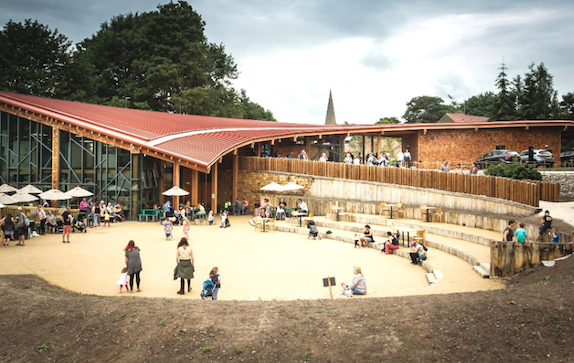 It was a triple celebration for the new Sherwood Forest Visitor Centre after it collected two honours at the prestigious Royal Institute of Chartered Surveyors (RICS) Awards, East Midlands, and a further accolade at the Local Authority Building Control (LABC) awards.

The state-of-the-art centre, which was partly funded by the D2N2 Local Enterprise Partnership, took top honours in both the ‘Tourism and Leisure’ sector and the ‘Community Benefit’ categories of the awards, organised by the Royal Institute of Chartered Surveyors, and held at Leicester’s Mercure Hotel recently.

The £5million Sherwood Forest Visitor Centre received £500,000 via the D2N2 LEP from its Local Growth Fund allocation, funding allocated by Government to part-fund infrastructure projects which directly benefit the economy.

The D2N2 LEP is the private sector-led partnership of business, local authorities, skills and training providers, and community and voluntary organisations, that promotes economic growth across Nottingham, Nottinghamshire, Derby and Derbyshire.

The Centre was among more than 25 of the region’s most impressive and community-beneficial property schemes vying for top honours at the annual RICS contest – sponsored by Sika Building Trust – which celebrated the region’s most inspirational initiatives in the land, property and construction sectors that are having a significant positive impact on the communities they serve.

RICS judges saw Sherwood Forest Visitors Centre as a significant gateway building, leading visitors into the ancient forest, and commended builders Woodhead Group, JDDK Architects, who designed it, and quantity surveyors Kartar Consulting for delivering the curved, twisted form building, saying: “through its design an accessible gateway and community engaging spaces to the forest are created. The creation of a ‘village square’ has encouraged greater affinity with the local businesses, and closer ties to Edwinstowe village.”

“Sustainability and environment measures have been considered at every stage to deliver a building which embodies creative thinking and long-term strategy.”

The site is managed by an RSPB-led consortium, working together with Nottinghamshire County Council, with Sherwood Forest Trust, Thoresby Estate and the Woodland Trust complete the partnership of funders alongside D2N2 LEP.

The RSPB’s Gemma Howarth, senior site manager for Sherwood, said: “We’re thrilled to win three such significant awards, which recognise the importance of the new centre in its immediate surroundings as well as the region’s tourism industry.”

The Centre will now be shortlisted alongside some of the country’s best new building projects competing at the national final of the RICS awards in London in October, and in November for the  LABC finals.