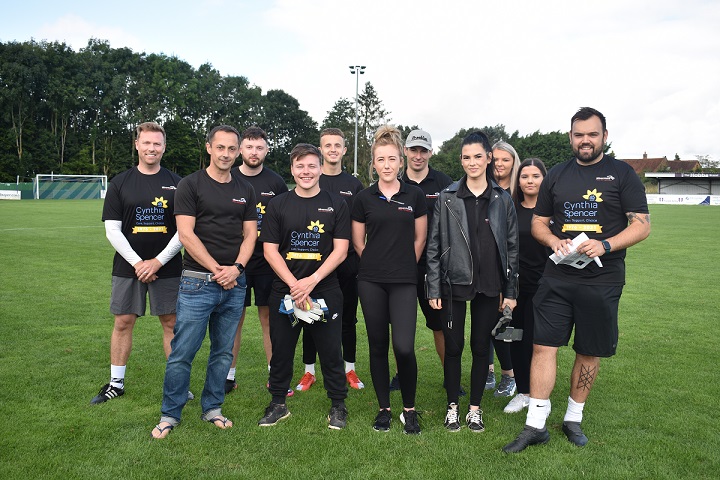 The second ever Silverstone Fleet Management fundraising football tournament has raised more than double the amount of money than the first.

Twelve businesses from across Northamptonshire took part in the five-a-side charity competition on Sunday (15th August) at Daventry Football Club, organised by the car and van leasing specialist, in aid of Cynthia Spencer Hospice.

The event launched with a hugely successful inaugural contest last year just before the pandemic hit and is the brainchild of Silverstone Fleet Management sales manager Ryan Bishop, who wanted to use his local business contacts and love of football to raise money for the hospice – the company’s Charity of the Year for the past five years.

Prior to the event, Silverstone Fleet Management set up a landing page for registrations and Ryan contacted numerous local businesses who all paid to take part.

On the day, more than 150 people turned up to enjoy the football and support the fundraiser, which also boasted an inflatable dart board game and a much-coveted raffle with top prizes including signed Northampton Town FC shirts.

The overall tournament winners were Euro Building and Maintenance Contractors Limited and YMD Boon Architects received the runner up trophy.

An impressive £2,096 was raised during the day – more than doubling the £732 raised at last year’s event.

Scott Norville, Managing Director at Silverstone Fleet Management, said: “We are thrilled at the success of the second Silverstone Soccer event. Cynthia Spencer Hospice has been our charity of choice for the past five years now.

“There’s a lot of members of the Silverstone Fleet Management team who have had personal involvement with the hospice. We are very lucky to have such a wonderful charity local to us in Northamptonshire and we want to do our bit to support it.

“This event was about raising money for a fantastic charity but also about getting people together after all the restrictions of the pandemic, and having some face-to-face interaction. The level of play was amazing, a lot of the teams had been training for months so the standard was really good.

“As well as football, there was some great networking going on and people left with plenty of leads too.”

Nina Gandy, Corporate Partnerships Fundraiser at Cynthia Spencer Hospice, was on hand during the day to talk to the businesses taking part, which Silverstone Fleet Management hope will lead to more fundraising opportunities for the hospice with other companies.

She said: “The tournament proved a great success once again. It was brilliant to see a range of teams who played in the tournament back in February last year as well as new teams too. There was a really great atmosphere on the day and everyone seemed excited to be back at a proper event again.

“Everyone who played, attended and donated raffle prizes will be making a huge difference to our patients and their families. A huge thank you to Ryan, Scott and all the team for making this a success once again.”

Silverstone Fleet Management has already committed to running the tournament again next year.