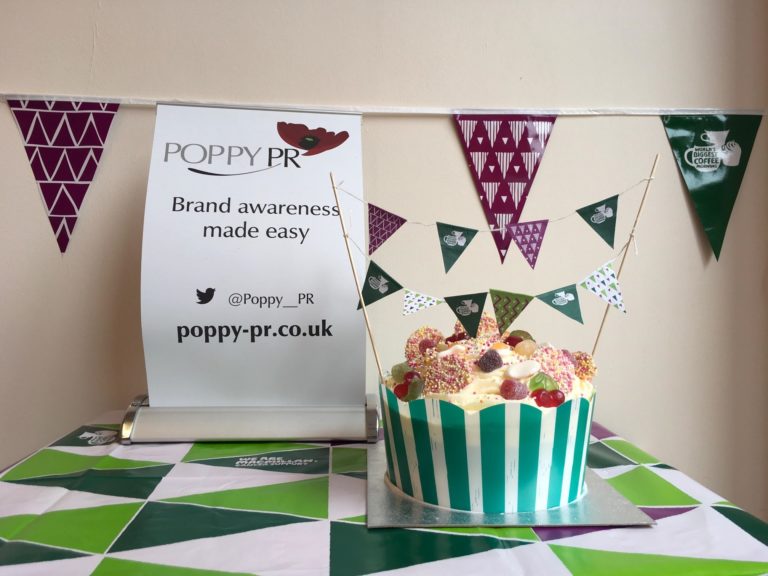 With more than half of its workforce being affected by cancer, and one of its PR managers announced as one of the top fundraisers for Macmillan, the team at Poppy-PR has revealed that it will be holding a very special networking event on September 29.

The event will see the PR agency located on Bath Street, Ilkeston, open its doors for its second ever public event from 8.30am-10.30am, as part of the Macmillan Coffee Morning, which will have full backing from Stacey’s Bakery.

The agency will invite other local businesses to come in and challenge them to a bake off style competition, judged by Stacey’s Bakery, in which the winner will win a free press release.

The firm’s PR manager, Sarah Dixon, became one of the top fundraisers for Macmillan in 2016, after her dad was diagnosed with bowel cancer in March 2015.

Sarah said: “On September 3 2015, we received the devastating news that my dad’s diagnosis was terminal and they did not envisage him making it into the New Year. I organised my dream wedding in just nine days, and my dad walked me down the aisle just nine days later.”

After her dad passed away on the December 28 peacefully at home, Macmillan were a tremendous support, and provided a wealth of information regarding treatment to finances.

Spurred on by his death, Sarah then took part in The IOW Ultimate challenge, which was a non-stop 106km walk around the Isle of Wight, which held fond memories for her, as it was their preferred location for family holidays when she was growing up. She then became listed as one of the top ten per-cent fundraisers for Macmillan, raising over £20,000 personally for the charity.

Managing Director at Poppy-PR, Tina Clough, said: “Cancer has also affected my family recently, and my auntie has recently been diagnosed with the disease. I was over the moon that she made it to my wedding in May, and it meant a lot to us all that she saw me walk down the aisle.

“The disease has also impacted our other PR Manager, Sarah Bould, which adds backing to recent figures that cancer will effect more than one in three of us at some point in our lives.

“We are such a close team here at Poppy-PR, and when the team are affected by loss or illness, it impacts us all. We have decided to open our doors on September 29 and invite businesses in to see us, as part of a free networking morning for Macmillan, where we will simply ask for donations towards the cause.”

Backed by local business, Stacey’s Bakery, which will be providing a range of sweet treats, the business hopes to raise as much money as possible, and hopefully connect a few of its clients, to create some business opportunities at the same time.

To attend the free business networking event, attendees can RSVP through the Poppy-PR website at www.poppy-pr.co.uk by sending the team an email.