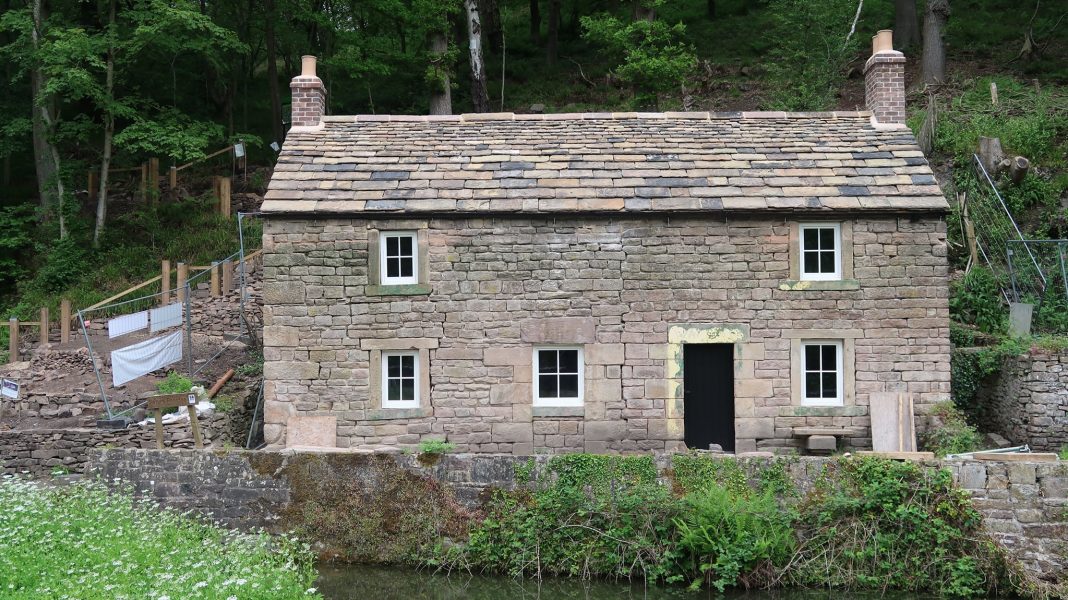 A hidden fairytale cottage nestled in an idyllic Derbyshire waterside spot is set to welcome visitors for the first time this summer.

Derbyshire firm Lubrizol has got behind a huge restoration effort to bring the historic grade two listed ‘Aqueduct Cottage’ by Cromford Canal back to life.

The beautiful stone building set snugly in the heart of the Derwent Valley Mills World Heritage Site has been unlived in since the 1970s when it was declared unfit for habitation. A simple two-storey dwelling, it is made of local gritstone and limestone mortar, has no water or electricity supply, and is not accessible by road.

A group of up to 50 volunteers have been involved in the restoration of the old cottage which was in an extremely bad state of disrepair and had no roof.

Lubrizol, based in Hazelwood near Belper, has donated vital funds which will help pay for works to the cottage’s interior so visitors can be welcomed there this summer for the first time.

Aqueduct Cottage was built in 1802 by Florence Nightingale’s great-uncle Peter to provide lock-keeper’s accommodation on what was at the time a new arm of the Cromford Canal. Peter Nightingale, a financial partner of famous mill-owner Richard Arkwright, created the new canal section to service his factories in the area.

Later, when Florence was conducting research which would lead to her theories on the importance of nursing, she visited many homes in the area which would very likely have included Aqueduct Cottage.

After the cottage fell into dilapidation, it was taken on by the Derbyshire Wildlife Trust as part of a gift of land from local residents. A project to restore it began in 2016, spearheaded by trust volunteer Ron Common.

Ron, a former employee at Bombardier in Derby, said: “I fell in love with Aqueduct Cottage as soon as I saw it.  In addition to its important historical roots, there are some wonderful old photos going back 120 years where it really looks like a fairytale cottage. There is a strong local affection for the cottage and over the past five years, it has been amazing how much the local community has got behind the work.

“The Derbyshire Historic Buildings Trust are partnering the Derbyshire Wildlife Trust in the restoration and helped secure planning consent for the Grade II listed building.

“Work began on the site in October 2019 and since then there have been between 40 and 50 volunteers involved, often working in all weathers.  The first job was to clear out 25 tons of debris from the cottage and barrow it 300 yards along the towpath to a skip, as Aqueduct Cottage is not accessible by road.”

Around £90,000 has been raised so far which has paid for external restorations, including a new roof and windows. Now money from Lubrizol is helping towards the cost of the interior restoration works, including interpretation panels for visitors to bring the history of the building alive for the first time.

The labour of love to restore Aqueduct Cottage has been featured on TV with the rebuild due to be completed by August.

Ron said he could not be prouder of what the restoration team has achieved. In 2021, he received a ‘Conservation Champion’ award at the Derbyshire Historic Buildings Trust architecture awards.

He said: “It’s probably the most exciting and enjoyable project I’ve done in my life! It’s thanks to corporate supporters like Lubrizol that we will soon be able to show off this remarkable building to visitors, and celebrate all that has been done.”

Claire Hollingshurst, quality systems manager from Lubrizol, said: “We’re delighted to support this fabulous project to restore Aqueduct Cottage for future generations to enjoy. The cottage is very near our site in Hazelwood and many of our employees enjoy working along the canal, where you can enjoy a perfect view of the cottage. It seemed only fitting that we should contribute to this project to see it restored and welcoming visitors again.”