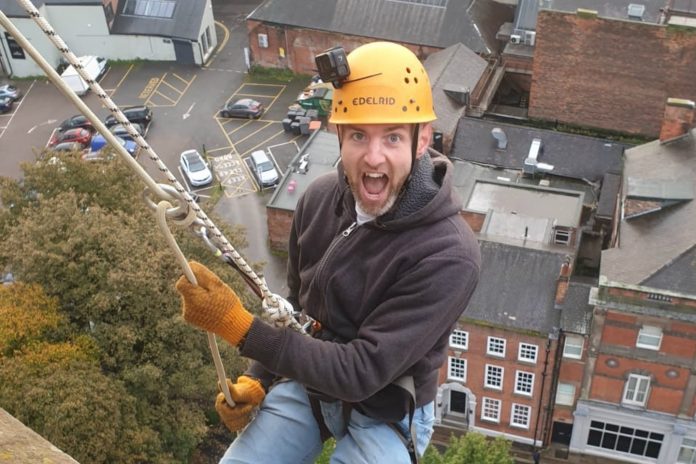 A total of 94 people took part in the Derby Abseil with the aim of raising thousands of pounds for Rainbows.

The participants climbed 17,766 steps between them as they abseiled down the 212ft tower at Derby Cathedral.

First to take the plunge was Matt Edwards, who works at Western Power Distribution. “I am doing this with some friends from work and rainbows is such a worthy cause,” he said.

The Deputy Mayor of Derby, Councillor Ged Potter, took part with his daughter, Isobel. He said: “We have raised over £1,000 so far. Getting to the top has taken my breath away. We did view a rainbow this morning so we thought that was a good omen. The Cathedral is probably the most iconic building in Derby and here we are at the top raising money for such a great cause.”

Also joining him was Lord William Burlington, the High Sheriff of Derbyshire. He added: “As High Sheriff, I have been lucky enough to see a lot of charities right across Derbyshire and see so many people do incredible volunteering work. They’re unsung heroes of the community. Rainbows is for the whole of the East Midlands and to be able to raise some awareness in this way means a lot to me. The staff that work there are amazing and everything they do for the children, young people and their families is fantastic.”

And in a day of celebrations, Ian Sutton of Weston Underwood, celebrated his 60th birthday by taking on the abseil. “It’s an excellent cause and it’s my birthday so I thought why not?” He said.

Everyone who took part was considered a superhero by us and some took it to the next level. Craig Brown, of Swadlincote, completed the challenge dressed as Batman. “One of my colleagues said he would give me an extra £90 If I dressed as a super hero,” he said. “It’s a great cause and I really enjoyed it.”

Event organiser Ali Furlong said: “The support we have had at this event has been incredible. This is always such a fun event and on behalf of everyone at Rainbows, I would like to thank all those who took part, our volunteers and everyone who supported us.”