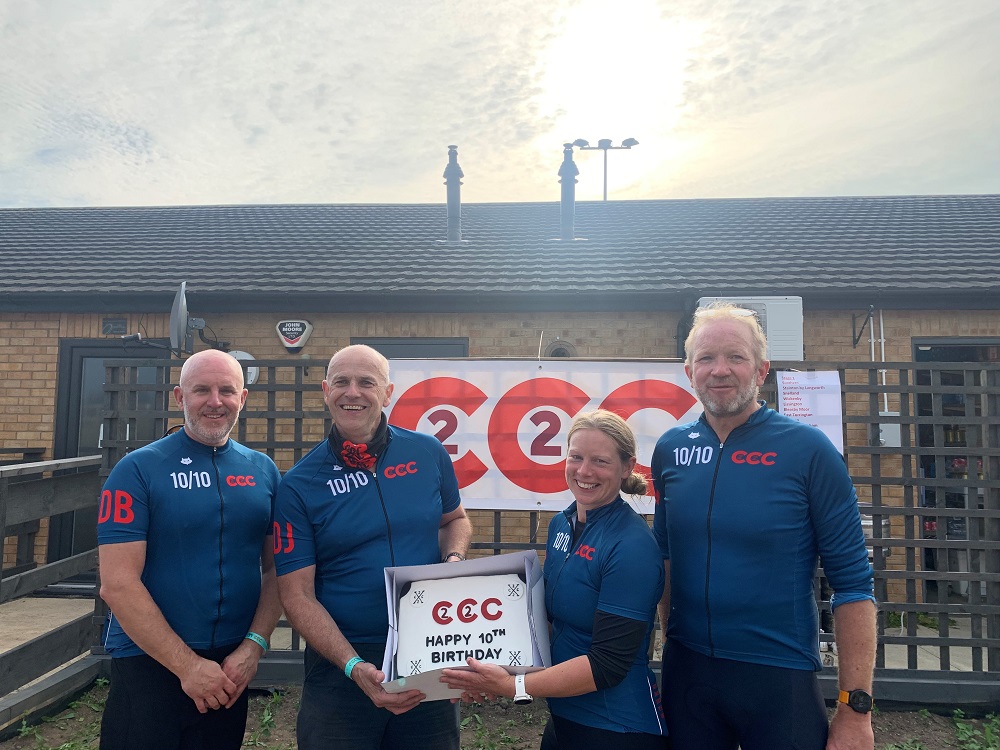 Earlier this month over 470 ‘cyclists’ set out to ride 100 miles in a day celebrating the 10th birthday of the C2C2C charity bike ride.

The event, which has just celebrated its 10th ride, is an annual event organised by a group of volunteers from local businesses in Lincolnshire.

The ride is open to anyone who wants to give it a go and sets off from Nettleham Rugby Club, across the beautiful Lincolnshire Wolds to the coast and back again – all in a day’s work.

This year over 470 individuals from across Lincolnshire rode the event and a great day was had by all.

C2C2C was established in 2011 as a way to get more people cycling, raise some money for charity and have fun. Since 2011 the ride has grown and grown, becoming one of the most popular events in the sporting calendar in Lincolnshire.

David Burgess, one of the original organisers of the event, said: “In 2011 there were just a handful of us who decided to plan this bike ride across the County for a bit of fun. We soon realised the event was becoming very popular and started to plan and adapt it accordingly.

“We now have a team of 9 volunteer organisers all from local businesses in Lincoln who coordinate the event, and over 50 volunteers who help with the event on the day.

“Since that first ride over 4000 people have ridden C2C2C, with over 1000 people riding 100 miles for the first time. All these riders have helped raise over £160,000 for local charities since 2011, and we are all extremely proud of these numbers.”

The ride has raised over £25,000 this year and with it being in its 10th year the money is being donated to 10 local charities, St Barnabas Hospice, LIVES, The Lincolnshire & Nottinghamshire Air Ambulance, ECHO, British Heart Foundation, Boston Community Transport, Lincoln MS Therapy Centre, Louth Men’s Sheds, Louth NSPCC and Rising Café.

Angela Gould, representative from Boston Community Transport attended the event and was waiting at the finish line for the riders to return.

She said: “We would like to express our thanks to C2C2C for choosing our Charity and the invitation to attend. It was an excellent event and extremely well organised. We would also like to thank C2C2C’s sponsors without whom the event wouldn’t have been possible.

“Boston Community Transport are a very small charity and really appreciate events such as this supporting our cause.  We rely on grants and fundraising to operate, so to be chosen means the world.”

To find out more about the event or to get involved in 2022 click or tap here.