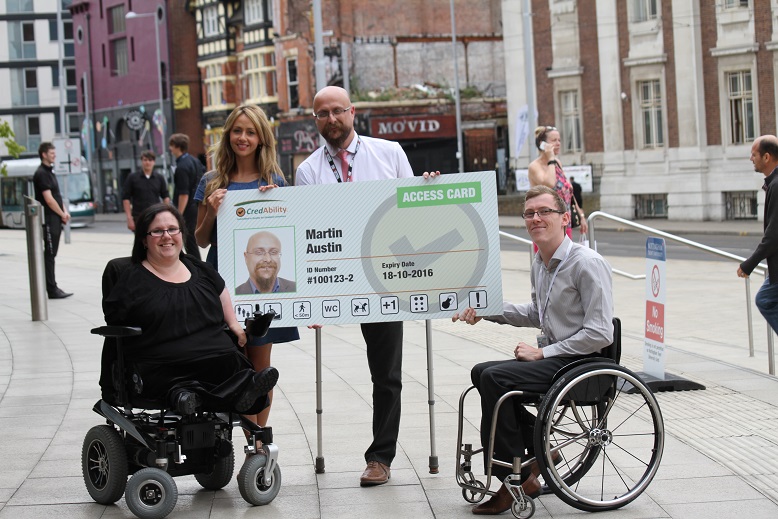 Nimbus, a company run by disabled people to help tens of thousands of their peers have better access to entertainment venues, has won a prestigious Queen’s Award for Enterprise.

The company which only has four employees created the bespoke Access Card under the leadership of Martin Austin, who has been an amputee since suffering cancer as a teenager.

It was recognised in the Queen’s Award’s Innovation category.

The Access Card translates its holder’s disability/impairment/access requirements into symbols highlighting the barriers they face and the reasonable adjustments they might need at an entertainment venue.

Each symbol is based on a person’s individual rights under the Equality Act and the service provider’s subsequent legal responsibility to make adjustments.

It informs providers quickly and discreetly about the support they need, meaning they now receive complex reasonable adjustments without having to go into intricate, often embarrassing personal detail.

The card is widely accepted at major venues across the UK and beyond including Buckingham Palace, Westminster Abbey, The London Eye, The O2 Arena and Alton Towers. Notable overseas venues which accept Access Cards include The Louvre in Paris and Chicago’s Willis Tower.

The card’s information has been linked into the computer ticketing systems of companies such as Ticket Factory, making the process of buying tickets for disabled people much less labour intensive and potentially embarrassing.

Nimbus was set up by Disability Direct which gave Martin the time and money to run with the concept for the card.

Martin said: “There was literally a moment when I was sitting with a pencil and a single piece of paper as the idea popped. The challenge starts internally convincing people that the investment to develop something is worth the risk.

“Secondly, you have to convince an entire, very well established, industry that you have something of value to them. After that and a few early adopters, you have the challenge of convincing those less adoptive of innovation to get on board.

“It’s not been an easy journey but I can honestly say it’s been an exciting one for me, my colleague Greg Johnson, who has grown with the scheme and is now our lead decision-maker, and our ever-expanding team. The award is also recognition for all of those who have supported us.

“As I have often told the team we stand on the shoulders of giants – pioneers who have paved the way to allow for this kind of innovation to even exist let alone thrive. The award is an overwhelmingly welcome signal of recognition but it is not by any means punctuation in our development.

“If anything, it’s a catalyst for all of those sitting on the fence of working with us to understand what we have to offer and take our work as seriously as we do.

“The innovative spirit from the team at Nimbus is still blazing and new developments are underway which include a Welsh Language version of the Access Card, the development of a revolutionary app and most excitingly, a complete re-evaluation of car parking and electric vehicle charging for disabled people.”