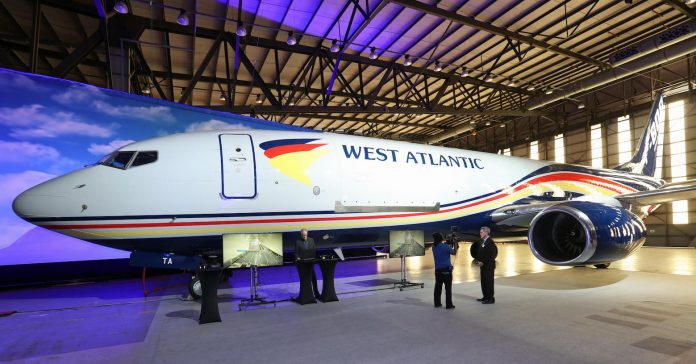 But, with a new generation of passenger aircraft coming onto the market, Boeing are converting existing 737-800s into cargo carriers.

West Atlantic, which transport goods on behalf of Royal Mail and DHL from EMA, receive their new aircraft on Thursday 19 April.

Increasingly, airports are setting more stringent rules around managing aircraft noise and demands are being placed on airline operators to use quieter aircraft. This is particularly key to EMA’s success as the UK’s busiest airport for pure cargo traffic, most of which flies in and out overnight. Strict quality control measures are in place to mitigate the noise from its night operation which means that it is one of the few airports in the UK to operate 24 hours a day, seven days a week.

Cargo operators, such as West Atlantic, are responding to these demands knowing that, if they are to continue to sustainably grow their operations at EMA, they need to invest in more modern aircraft.

The 737-800 BCF (Boeing Converted Freighter) is one of the industry’s most efficient and reliable aircraft and is 20 per cent more fuel efficient than its classic 737 freighters. The aircraft also has an increased range which helps keep fuel costs down too.

West Atlantic are leasing four of the new 737-800s, the other three will be added to the fleet in the coming months.

East Midlands Airport is second only to Heathrow in terms of the total tonnage of cargo that passes through it annually.

Through EMA, and its connections to air cargo hubs in Europe and the USA, UK businesses export to 200 different countries around the world. Latin America, Asia, North America and the Middle East are some of the biggest regions for exports.

Neil Robinson, Corporate & Social Responsibility Director at East Midlands Airport, says: “We’re delighted that West Atlantic is leading the way by leasing Boeing’s new freight aircraft. We work closely with all our airline partners to ensure that everything is being done to minimise the impact of our operations on the local community. While we want to grow the business, and attract more airlines to give a greater choice to passengers and businesses who need goods transporting all over the world, we’re very focused on sustainable growth in line with our commitment to being a good neighbour.”

West Atlantic’s Chief Executive, Fredrik Groth, says: “We’re excited to be the first operator of the 737-800BCF. The additional capacity and Next Generation efficiency offered by this new aircraft will deliver real benefits to our customers and we’re delighted to be at the forefront of delivering this new technology.

“This aircraft, and the additional three being delivered to us within the next 11 months, will be operated for one of the most recognized global integrators within their European Network. With the 800 BCF, we expect to improve reliability, lower aircraft operating costs, and leave a better environmental footprint.“

EMA’s Noise Action Plan (NAP) outlines the airport’s responsibility to limiting and reducing, where possible, the number of people affected by noise from its operation.

The NAP supplements its Sustainable Development Plan which sets a maximum noise level for night-time operations. The NAP is reviewed every five years and the airport is publishing a draft refreshed plan for public consultation on 8th May.

COVID-19 has become biggest concern for 81% of UK businesses, says...

30th March 2020
COVID-19 has eclipsed Brexit as the biggest worry for UK businesses, according to new figures from the University of Nottingham. The new data shows that...

Gaps in coronavirus support for business need to be filled